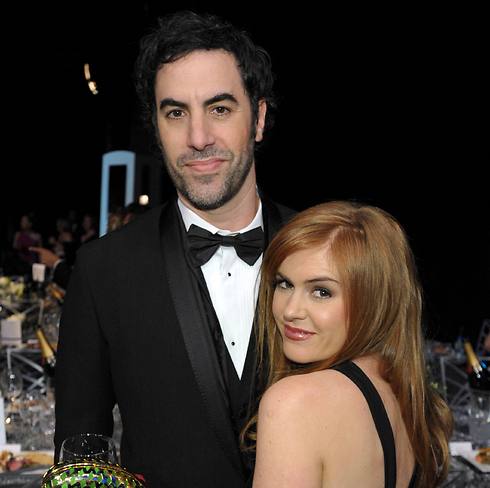 Jewish actor and actress wife Isla Fisher are giving half a million to Save the Children and half to the International Rescue Committee.

The "Borat" star and actress wife Isla Fisher are giving $500,000 to Save the Children to pay for measles vaccinations for children in northern Syria. They are also donating the same amount to the International Rescue Committee (IRC) to help refugees in Syria and neighboring countries, particularly women and children, with health care, shelter and sanitation.

Sacha Baron Cohen and wife Isla Fisher (Photo: AP)
More than four million refugees have fled conflict in Syria for the relative safety of the neighboring countries, according to the United Nations. Millions more have been forced to leave their homes for other parts of the country. Justin Forsyth, chief executive of Save the Children, said the money would "save many thousands of lives and protect some of the most vulnerable children." "By allowing us to make their generous donation to Syrian children public, Sacha and Isla are helping highlight the tragedy of the issue today," he added.

David Miliband, the ex-British foreign secretary who is president of the IRC, called their gift a "great expression of humanity."

Cohen, 44, starred in comedy features including "Borat" and "The Dictator." Fisher, 39, appeared in "Confessions of a Shopaholic" and the Netflix comedy series "Arrested Development."