One of the suspects
Photo: Hassan Shaalan 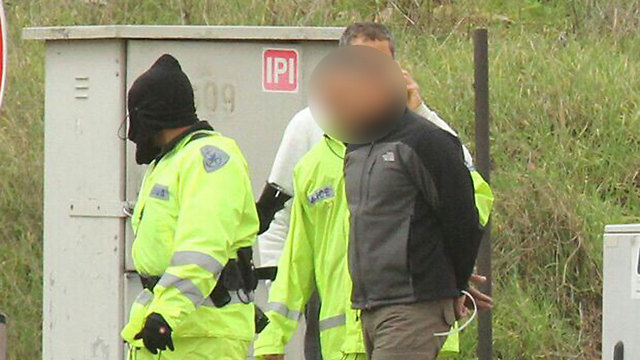 Suspect tells Haifa court he encountered Nashat Melhem, but did not recognize him; another suspect was the one who reported Melhem's location to police, leading to his capture.

Questions remained on Saturday regarding how terrorist Nashat Melhem, who murdered three Israelis in Tel Aviv, was able to evade capture for a whole week.

A day after Melhem was shot dead by security forces that came to arrest him at his hiding place in Arara, Shin Bet investigators were interrogating at least three of the terrorist's acquaintances, who are suspected of helping him.

They are suspected of aiding and abetting Melhem, conspiring to commit a crime, and being part of an unlawful organization.

The Shin Bet and police believe that without help, Melhem would not have been able to hide for a whole week while a manhunt was underway for him.

"He received full assistance, particularly from his relatives, ever since he arrived in Wadi Ara on Friday (the day of the attack). Every day he slept at a different place. They brought him food and worked to protect him," a police official said.

The Haifa Magistrate's Court held a hearing on Saturday night for five suspects in aiding Melhem.

One of the suspects, a business owner in the area, was the one who reported Nashat's hiding place to the police, but was arrested on suspicion he helped the terrorist. His remand was extended by three days.

Attorney Jamil Khatib, who represents two of the suspects, denied the allegations against his clients. "At a later stage we'll know the reasons that led to their arrest. They actually wanted to help, but unfortunately everyone that helps these days will get burned."

"There might have been tarrying in reporting (Melhem's sighting), which wasn't done in real time," the lawyer continued. "But you have to understand the problematic nature of this, in light of the sensitivity of the situation and the fact Nashat Melhem could have recognized whoever saw him, this would've put their lives at risk."

Another suspect told the court that "Someone came up to me, probably the terrorist. But I didn't recognize him, I didn't know it was Nashat. Police asked me why I didn't report him, and I said I didn't even know it was him." His remand was also extended by three days.

A third suspect told the court that "Someone called me and told me he saw Nashat. I didn't believe him, I thought he was lying and I didn't inform the police." His remand was also extended by three days.

Melhem murdered Alon Bakal and Shimon Ruimi at a bar in Tel Aviv last week. Later, while he was on the run, he murdered taxi driver Amin Shaban in northern Tel Aviv. Police and the Shin Bet were looking into suspicions he was influenced by ISIS, and whether he acted out of his own volition or was part of an organized terror cell.

On the same day of the murders, Melhem fled north to his home town of Arara, while special forces were searching for him all over northern Tel Aviv.

DNA on a cigarette butt

The Shin Bet's assessment that Melhem was hiding in Arara increased on Wednesday, one day after Police Commissioner Roni Alsheikh announced to the Israeli public that "the level of tension in Tel Aviv can be reduced."

Suspecting he might have gone home to hide, investigators put pressure on Melhem's relatives and acquaintances in an effort to find where he was hiding. Security forces also put a surveillance detail on several people they suspected might be in contact with the terrorist, including his family members.

Intelligence and Shin Bet forces signposted several buildings in Arara as possible hideouts, based on testimony provided by one of Melhem's acquaintances. They searched the area in which Nashat grew up and the places he recently spent time at, looking for forensic clues, aided by sniffer dogs and methods of criminal identification.

The breakthrough in the investigation came from a cigarette butt containing his DNA that was found by Shin Bet investigators in Arara, showing he was in the area.

This led security forces to set up roadblocks and checkpoints all over the area and deploy large numbers of troops in an effort to prevent him from leaving the area and crossing into the West Bank.

Investigators received information that pointed to Melhem being in Arara as early as Thursday morning, but it appears that in an effort to capture his accessories, the decision was made to keep monitoring him for afar.

On Friday morning several intelligence reports from different sources led to the conclusion that Melhem was hiding in one of the buildings in his childhood neighborhood.

Before raiding the building, which seems to have been empty before Melhem went to hide there, large numbers of IDF and police forces closed off the neighborhood.

Security personnel went from house to house and marked the buildings that they had passed. Melhem was apparently tipped off that security forces were on their way, left the building and tried to escape. When he realized he was cornered, he opened fire at the security forces using a Falcon sub-machine gun that was in his possession, which he had stolen from his father and had used to carry out the murders in Tel Aviv. The troops returned fire and killed him.