Seconds after the explosion 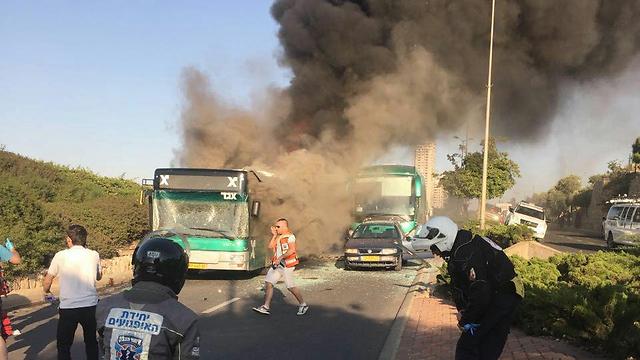 Analysis: The explosive device detonated on a Jerusalem bus on Monday appears to have been made by a professional; while there is still a dearth of details regarding the bombing, the attacker likely detonated the bomb at the back of the bus to ignite the gas tank.

Although details surrounding Monday's bus bombing in Jerusalem that wounded 21 remain unclear, the information that is available points to a small explosive device placed at the back of the vehicle, under a seat and above the gas tank. The placement of the device explains why a relatively small bomb was able to cause such a large and immediate explosion. The extent of the fire also led to an adjacent bus, as well as a taxi, to go up in flames.

It also appears that the device was made by a professional rather than the somewhat prolific pipe bomb.

There have been three or four incidents of such pipe bombs being used during the so-called knife intifada, thrown by lone-wolf attackers with no organizational affiliation towards Border Police and IDF troops. The devices used in those attacks were short pipes filled with matches or gunpowder. These glued-together pipe bombs do not resemble that used in the bus attack.

The device that blew up in Jerusalem is likely to have involved more work and more knowledge to build, and used explosive material powerful enough to rip through the floor of the bus and to pass through the flap over the gas tank or engine of the bus.

The identity of the attacker is still being investigated, although it is likely that he is the individual who was critically wounded in his lower body in the blast. This means that the device was placed close to his legs and not his torso (that is, he wasn't holding the device in his hands or resting it on his knees).

Nonetheless, it is also possible that the device was stashed under a seat by someone who then got off the bus, and detonated by a timer or remote control.

The two most significant questions remain unanswered: Who initiated and carried out this terror attack, and does it represent a turning point in the current wave of attacks? And additionally, are we moving from knife terror carried out by lone-wolf attackers to lethal violence with the kind of devices and weapons we saw in the second intifada?

As regards the identity of the attacker, it should be noted that throughout the current wave of terror, which began in September 2015, the Shin Bet has exposed at least 10 incidents in which Hamas, Islamic Jihad and the PFLP have plotted to carry out attacks with guns, regular bombs and suicide bombers. Some shooting attacks were successfully carried out, as were attacks with pipe bombs.

The Shin Bet, the IDF and the Border Police arrest numerous suspects on a nightly basis, whom they believe to be trying to activate Hamas cells. These arrests have thwarted many terror attacks. It is possible that the Jerusalem bus bombing is one such incident that the Shin Bet did not succeed in uncovering, and Hamas or Islamic Jihad may have managed to stage the attack using one of their operatives in the Jerusalem area.

The timing of the attack also may be significant because Hamas currently has several reasons to carry out such strikes this week. One reason is the dwindling number of knife attacks, which Hamas is trying in vain to sustain. Another reason is the renewed incitement surrounding the Temple Mount, which is also designed to reignite the situation.

The third reason is the Hamas tunnel that the IDF revealed on Monday. If Hamas indeed initiated Tuesday's bus bombing, it is reasonable to assume that it was in an effort to cover up its failure on this front.

While Hamas is the primary suspect, we still have no further indication that would back up this estimate. As such, everyone remains a possible suspect, including Islamic Jihad, the PFLP and possibly even Fatah or a lone attacker. We are likely to receive answers in the coming days.

Until we have full knowledge of the details we must not jump to conclusions and assume that we are dealing with a renewed wave of terror and an escalation involving explosives, suicide bombers and guns. For the time being, this remains a solitary incident and we must hope that it stays as such. The Shin Bet and the IDF for now have the means to track down attacks under preparation that involve far more than a kitchen knife and a Jew minding his own business in the street.