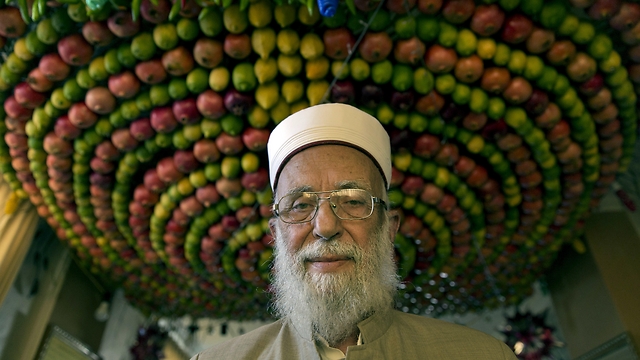 In the West Bank, Samaritans provide a sanctuary

Straddling the world between Israeli and Palestinian, the Samaritans host Jews and Arabs in their sukkah for the Jewish holiday of Sukkot; Israeli Amichai Zev: 'You see how comfortable we feel here... I don't have to look behind my back.'

Israelis and Palestinians in the West Bank live in separate worlds. However, there is a spot on the top of a mountain that connects them both: a village of Samaritans.

To get there, Israelis drive up a steep, winding road, near ominous red road signs posted by Israel's military that warn them against

entering the nearby Palestinian city of Nablus. Palestinians get to the top by driving up a steep, winding road from Nablus on the opposite side of the mountain.

At the top live about 380 Samaritans. They, and about 420 Samaritans living near Tel Aviv in Israel, comprise one of the world's oldest and smallest religious minorities.

The Samaritans' unique role—highlighted during the Sukkot holiday now under way—is particularly poignant at a time when hope for negotiating an end to the conflict is at an all-time low.

Best known from the New Testament parable of the Good Samaritan, the sect traces its roots to the ancient Israelites, follows the Five Books of Moses and celebrates biblical holidays.

"If we get involved in either side," said Linda Sadaqa, a 43-year-old Samaritan who works in the Palestinian Health Ministry, "they will squeeze us."

They're caught in a particularly violent spot, just up the road from where a fatal Palestinian shooting attack last year on an Israeli settler couple helped fuel the current violence, and close to the intersection where Israeli border policemen on Wednesday shot and killed a 19-year-old Palestinian woman after she walked toward them with a knife and ignored calls to halt.

Still, the Samaritans have managed to remain in the good graces of both Israeli and Palestinian societies, despite decades of conflict, including Israel's half-century of military rule over Palestinians.

It's particularly apparent during the week-long biblical holiday of Sukkot, or Feast of Tabernacles.

In the Bible, God commands the people of Israel to build huts symbolizing the Israelites' encampments as they wandered the desert following the exodus from Egypt. Unlike the outdoor huts Jews construct on the holiday, Samaritans build exquisite canopies of densely packed fruit, which are attached to metal frames and perched on stilts or suspended from living room ceilings. The colorful sight attracts a parade of Israeli and Palestinian visitors.

One afternoon this week, Samaritan high priest Abdullah Wasef Tawfiq received a group of Palestinians, employees in the tahina factory he owns, from the neighboring village of Beit Furik. Since last year's shooting, the village has been under periodic Israeli military closures, occasionally preventing Tawfiq's employees from coming to work on the Samaritan mountain.

The 81-year-old high priest with a white turban and white beard chatted about Islam and the Samaritan religion as his Palestinian employees held up their phones to photograph the concentric circles of pomegranates and greenish-yellow lemons accented by a stripe of citrons (etrogs), a fruit associated with the holiday.

Shortly after, a 25-year-old Israeli from a nearby settlement and his friend crouched under the same fruit canopy to take a photo, a gun tucked into the waistband of his shorts. "You see how comfortable we feel here," Amichai Ziv said. "I don't have to look behind my back."

The procession of visitors continued: an Israeli military official and his troops, a group of Palestinian journalism students, Palestinian families. The chairman of the area's Jewish settlement council and the Palestinian governor of Nablus paid separate holiday visits to the high priest.

Israelis and Palestinians both claim the Samaritans as their own. "I see them as my relatives. As brothers, really," said Yossi Dagan, the Jewish chairman of the Samaria Regional Council.

"The Samaritans are part of the Palestinian people," said Akram Rajoub, the Nablus governor.

The increased tensions in the West Bank this year put a damper on the Samaritans' Passover ceremony last spring, when Samaritans slaughter sheep according to a biblical edict. Usually, Palestinian and Israeli dignitaries observe the ceremony in relative coexistence, but this year, the Nablus governor stormed out of the ceremony when Dagan addressed the crowd.

The Samaritans of the West Bank are the only people who carry both Israeli and Palestinian government-issued identity cards, according to Michael Corinaldi, an Israeli lawyer who has represented the Samaritan community in court.

The privilege affords them unfettered access to Israel, which most of their Palestinian neighbors do not have. In Israel, they earn higher salaries than in the West Bank, or take advantage of their special travel access to import fresh fish or Israeli appliances into the West Bank. A recent sewage upgrade in the Samaritan village was funded jointly by Israel and the Palestinian Authority.

But the dual identity can be a burden, especially for the younger generation of Samaritans.

One 21-year-old marketing student, a grandson of the high priest, said he isn't always open about his religious identity on campus at his Palestinian university so that he wouldn't be mistaken for an Israeli.

On the flip side, he said, Israeli soldiers took him for a Palestinian suspect last year. They held him at gunpoint when he hopped out of a Palestinian car at the foot of the Israeli-only road leading to his Samaritan village. Matters got complicated when a soldier demanded his ID and saw his unusual name: Abdullah Cohen.

"He was shocked," Cohen said of the soldier's reaction to his typical Palestinian first name and typical Jewish last name.

Cohen's grandfather, the high priest, has asked members of his community to be careful about what they post on Facebook. "Samaritans need to walk between the raindrops," the high priest said.