President Rivlin. Arabs admire him because he respects them
Photo: Ohad Zwigenberg 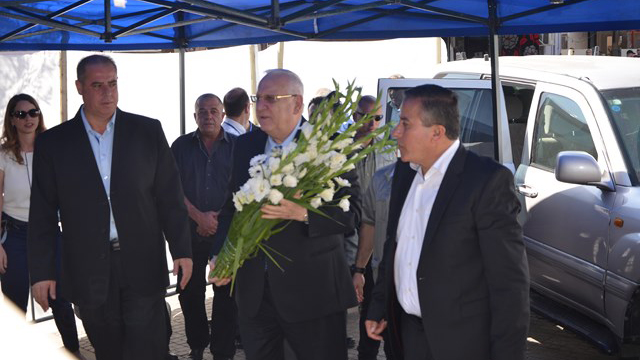 Op-ed: The muezzin’s call for prayer is a nuisance that has to be taken care of, but this matter can be handled through an understanding and a dialogue rather than in a way that will only increase alienation. This is where President Rivlin comes in.

President Reuven Rivlin has made some problematic statements since taking office. The most problematic comment was “my people have chosen terror.” The full text reveals that Rivlin added, “Their way is neither the State of Israel’s way nor the Jewish people’s way.” But Rivlin has been in the public arena long enough to know that there are things that will clearly be used as fuel for the anti-Israel industry. It’s a shame those comments were made. Nevertheless, we should be thankful for Rivlin’s existence. He stepped into the big, perhaps huge, shoes of his predecessor, and that’s not easy. His ultra-right political views—he was and remains in favor of annexing the territories—presented quite a difficult challenge for him. He could have created alienation and division. Instead, he is exceling in a different direction: He is becoming the responsible adult.

President Rivlin visits the Israeli Arab city of Kafr Qasim. He embraces, he reconciles, he searches for a common ground (Archive photo: Halal)

Now, it’s the ‘Muezzin Bill.’ There isn’t a shred of racism in the demand to lower the volume. Similar laws exist in Muslim countries as well, even in Saudi Arabia. The Muslims are the ones who suffer the most from the high decibels, more than neighbors of other religions. Nonetheless, there is sometimes a need for some common sense. Not everything that's right is also wise. Rivlin’s intervention against this legislation puts him in the position of the wise man.

True, a president should not be dealing with political issues. He should not get involved in a dispute over a controversial law. But Israel’s political system occasionally seems to lose its self-restraint and slide to over an extremes. Perhaps because of the primary election system, perhaps in an attempt to gain a few more headlines. During times of crisis, a proper president should reflect the common denominator. His job is to reconcile and unite. This is why Rivlin has refrained from voicing his opinion on the annexation of the territories. He knows it will create a dispute. He should be given credit for his restraint.

Israel is a Jewish state, but it doesn’t belong to Jews alone. There is no need to love the political views of certain Israeli Arab leaders to know that this public is the state’s flesh and blood. And the better this public feels, the better off the Jewish majority will be. This is not just about budgets, it’s also about empathy. Arab friends tell me they admire Rivlin because he respects them. They know he is right-wing, and it doesn’t bother them. He embraces, he reconciles, he searches for common ground.

And why is this important in the context of Israel’s Arabs? Because despite it being very easy to nurture hate and alienation, Rivlin proves things can be done differently. According to the latest poll among Israel’s Arabs, 53 percent are proud to be Israeli, an increase from previous years. They see what is happening around them, and they realize that in spite of all the problems—and there are problems—they are very lucky. This direction must be nurtured, and that’s what Rivlin is doing.

More importantly, there is no contradiction between right-wing views and sincere empathy towards Israeli Arabs. Part of the Arab leadership—and a smaller part of Jewish politicians—is nurturing hostility. Rivlin is busy fixing. The current government should be given credit for doing things for the Arab sector. The five-year economic plan, for example. Rivlin is adding the empathy; in the East, it’s called “giving respect.” It’s a combination that can be to out benefit, as long as the Right is represented by Rivlin rather than by Knesset Member Bezalel Smotrich. The muezzin’s call for prayer is indeed a nuisance that needs to be taken care of. But this matter can be handled through an understanding and a dialogue. There is no need to choose a way that will only increase alienation. Not everything done in Switzerland or in Slovenia—and even in Saudi Arabia and Egypt—is suitable for Israel. This is where Rivlin comes in. He deserved our appreciation.