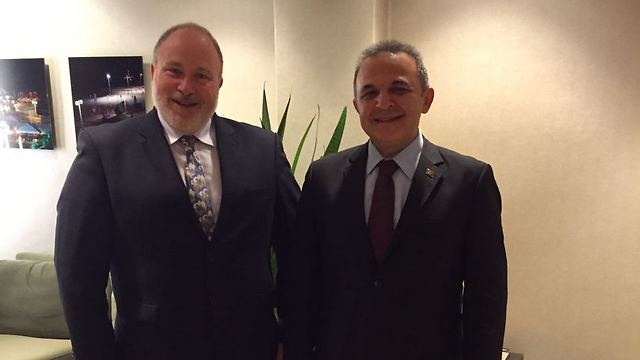 Kemal Okem, Turkey's new ambassador to Israel, arrives at Ben Gurion Airport to assume the position that was left vacant for six years due to fallout from the Mavi Marmara incident.

The new Turkish ambassador to Israel, Kemal Okem, arrived Saturday night at Ben Gurion Airport, where he was greeted by Meron Reuben, head of the Foreign Ministry's protocol department.

Okem came to Israel with his wife and two sons to fill the position that has been vacant for the last six years as a result of fallout from the Mavi Marmara incident, following which former Ambassador Ahmet Oğuz Çelikkol was recalled.

Israel and Turkey have since signed a reconciliation agreement, wherein Israel agreed to pay compensation to the victims and their families, while Turkey agreed to reduce Hamas activity in its territory and drop all legal proceedings against Israel and the IDF.

On Sunday, Okem is due to arrive at the Foreign Ministry in Jerusalem and present a copy of his credentials, which will also be presented to President Reuvlin Rivlin on Monday.

Okem's last position was a political advisor for Prime Minister Binali Yıldırım. He is a career diplomat who previously served as the deputy director general for the Middle East at the Turkish Ministry of Foreign Affairs, where he was in charge of the Israel desk.

Okem is described as having an excellent rapport with Israeli diplomats and is reportedly very excited to assume the position as ambassador. He has so far refused to be interviewed.

Before arriving in Israel, Okem met with his Israeli counterpart, Eitan Na'eh, who arrived in Ankara. The two exchanged pleasantries and promised to keep in touch with one another.