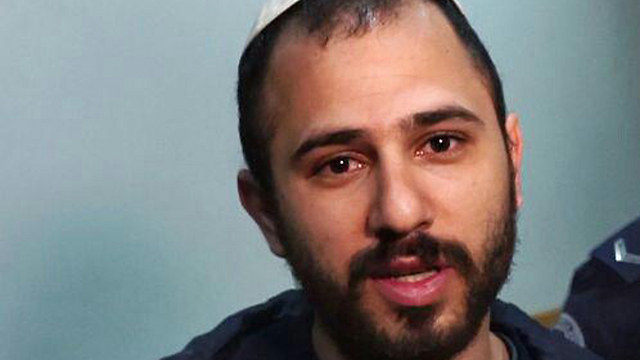 An indictment will soon be filed against Nadav Sela for the gruesome murders; Sela spent nearly three weeks under psychiatric observation before his fitness was declared.

A psychiatric evaluation found that 28-year-old Nadav Sela, who is suspected of murdering his wife, two children and his neighbor’s child last month, is fit to stand trial for his alleged crimes.

The evaluation was presented after Sela spent nearly three weeks under psychiatric observation.

Nadav Sela (Photo: Gil Nechushtan)
Sela has already been brought before the court four times following the murders. In the first deliberation, he begged God for forgiveness. In following deliberations he started acting weird, claiming "I'm a cat", tried standing on all fours and mumbled various Bible passages.

Sela's attorney may appeal against the evaluation and ask for a second opinion by a psychiatrist of his choice. If the latter opinion contradicts the first, the court will appoint a third psychiatrist to decide.

Dor Sela and her two children

Sela's 23-year-old wife Dor, their children Benjamin and Yosef, both toddlers, and the neighbors' 11-year-old son Nahman Atia, were all allegedly stabbed to death by Sela.

He also stabbed and moderately wounded Nahman's 10-year-old brother, who managed to survive. He was apprehended by a young man who chased him into a grove nearby Sela's house.

Nahman Atia
Migdal, a town with only about 1,200 residents, was swept up in an emotional storm after the incident. Most of the residents are religious, and news of the murders was spread by word of mouth. Many arrived at the scene in shock, and nearby residents were heard loudly crying and angrily cursing the father.

Sela's evaluation was finished last week and determined that he was fit to stand trial. The police have filed a prosecutor's statement, which indicates the intention to file an indictment, against Sela to Nazareth Magistrate’s Court, which has extended his remand until Thursday.

An indictment will be filed against him later this week.