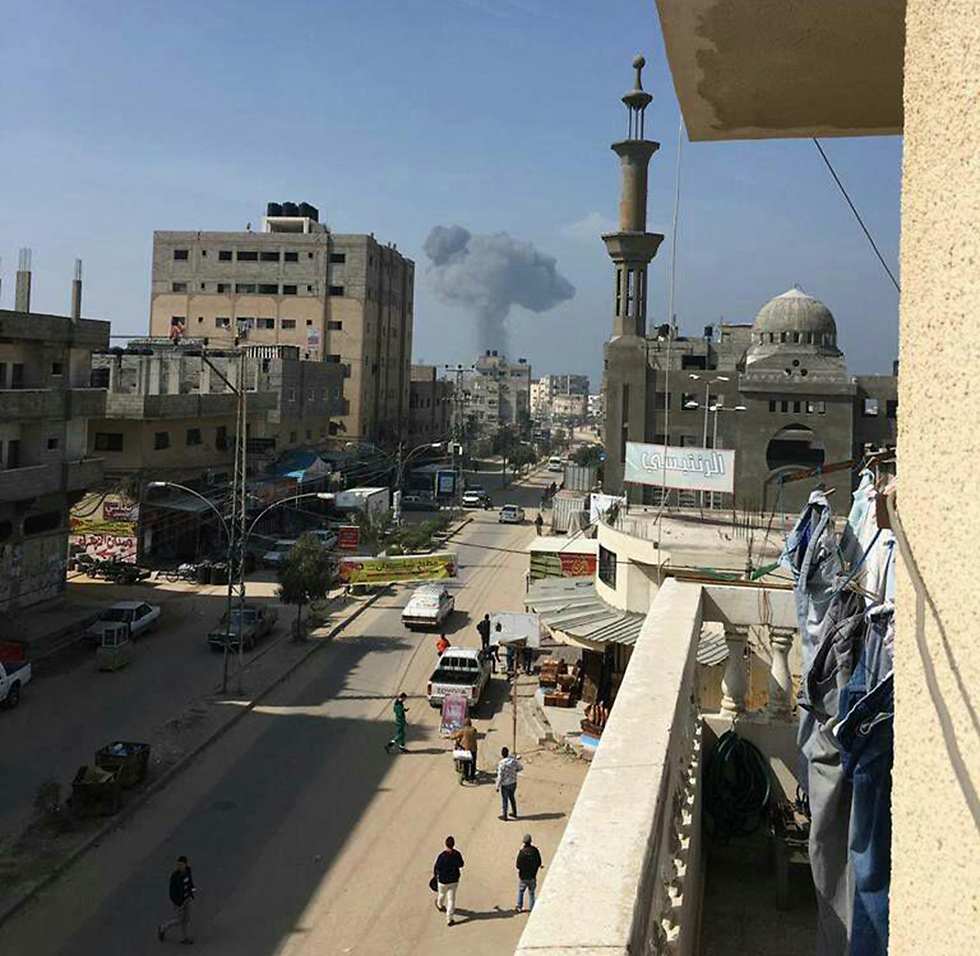 It’s time for a clear decision on Gaza

Analysis: IDF officials believe—just like on the eve of Operation Protective Edge—that neither Israel nor Hamas are interested in an armed battle. At the time, a series of military activities on both sides led to misunderstandings of the situation and to a comprehensive battle. We must not wait for an uncontrolled deterioration again.

According to eyewitnesses in the Gaza Strip, Hamas on Monday lost two key strategic assets in which it had invested hundreds of thousands of shekels and which served as threats on Israeli territory.

As part of an airstrike which lasted several hours, dozens of bombs were dropped on more than 10 sub-targets in these two assets. Hamas is beginning to internalize the fact that one of its main tools in fighting Israel is losing its effectiveness.

Gaza, Monday. Under Yahya Sanwar’s leadership, Hamas’ military wing is becoming more short-tempered
This isn’t the first time that such targets are attacked by the Israel Air Force. But the last time similar targets were attacked, Hamas was led by Ismail Haniyeh. Today the organization is headed by Yahya Sanwar, who is perceived as more radical and militant than his predecessor. In his term, Hamas’s military wing is becoming more short-tempered.

The fact that Hamas is starting to realize that Israel has a formula which allows it to deal with its surprise and deterrence weapon efficiently may shorten the decision-making process in the organization and cause Hamas to ignite the region before it loses its key offensive abilities—especially as it sees the activity being performed by Israel along the border on a daily basis.

These are not the only strategic assets Hamas has lost recently. About a week ago, one of its UAVs was shot down. Israel relayed a message to Hamas, making it clear that it would not accept a situation in which Hamas UAVs collect intelligence within Israeli territory. Sanwar was forced to accept this, but Hamas is beginning to realize that Israel is dictating different rules for the game. Israel will no longer let Hamas dig tunnels into Israeli territory while sitting and waiting for the next round.

Hamas spokesmen said Monday that they would not tolerate any changes in the rules of the game. So one of the following two scenarios is possible: Either Hamas will use more extreme restraining measures against the Salafi groups in the strip that are firing rockets at Israel, so as not to give the IDF a reason to attack, or the countdown has begun to another round which will take place, as Minister Yoav Galant predicted, this coming summer.

If the IDF keeps claiming heavy painful prices in the Gaza strip, the State of Israel will basically force Hamas leader Sanwar to make a decision. The man who emerged from the protest of leading Hamas activists who accused the previous leadership of giving up the armed battle will not be able to disappoint his supporters for long.

Military officials believe—just like they did on the eve of Operation Protective Edge—that neither Israel nor Hamas are interested in an armed battle. At the time, a series of military activities on both sides led to misunderstandings of the situation and to a comprehensive battle. We are in a similar situation today. We shouldn’t wait for an uncontrolled deterioration.

The ministers who sat in the Security Cabinet during Protective Edge are now whining: We didn’t know, we didn’t hear, we weren’t told. Now, as part of the lessons being learned from Protective Edge, a clear political decision must be made on the direction we are headed in and on what we want from the Gaza Strip. That may be the way to avoid another commission of inquiry—or another state comptroller’s report—in a few months from now.