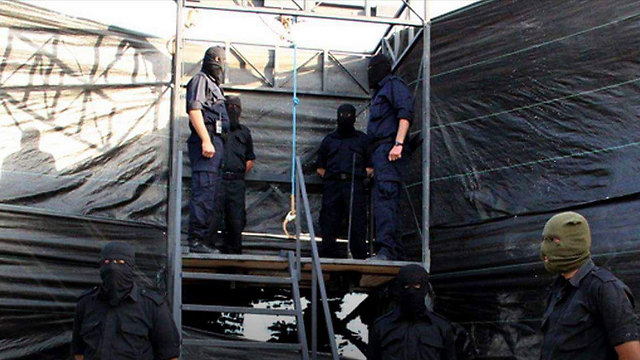 The three men were hanged in a Hamas police station in Gaza after being sentenced to death for undisclosed acts of 'collaboration' with Israel; executions are not connected to Mazan Fukha assassination.

The three were sentenced to death before the assassination of Mazan Fukha and have no connection to Hamas's pursuit of those responsible.

Gallows erected for the execution in a Hamas police compound

The executions come a day after Hamas's attorney general announced that executions of collaborators would be carried out, trying to instill fear of cooperation with Israel among the strip's residents.

At the end of last week, the Interior Ministry in Gaza announced that the security services were facing a major operation against collaborators in the investigation of the assassination of Fukha.

Such operations often do not come with prior warnings, and it seems that Hamas was trying to shake things up to identify potential avenues for the escape of the assassin(s), despite the slight chance that they could still be found inside the strip.

The terrorist organization apparently has no leads as to the identity of the perpetrators or their collaborators.

One day after the announcement of an operation against the collaborators, the Interior Ministry issued a statement saying that it was opening a kind of system of pardons for the collaborators with Israel, and called on them to surrender within a week and receive security and legal protection.

It is quite possible that Hamas will place the blame on innocents who will have to confess to things they have not done, only to broadcast victory, even if it is a false one.