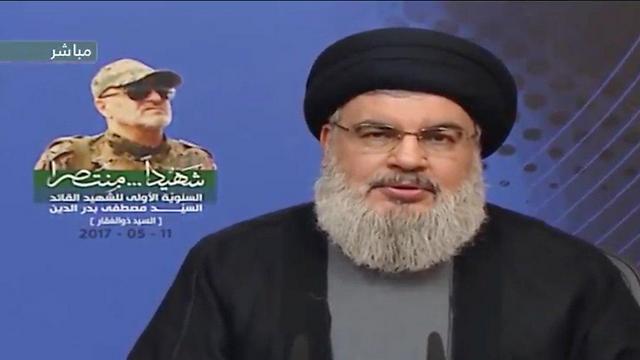 The secretary-general of the terrorist organization used the event to mark the anniversary of the assassination of Hezbollah's military commander to taunt Israel: 'Their means are worn out. … they know that any future confrontation could be inside occupied Palestinian territories.'

Hezbollah leader Hassan Nasrallah addressed on Thursday the incident of the Lebanese civilian who crossed the border into Israel last month: "The Israelis have erected a number of fences and installed advanced warning systems on the border … but a few weeks ago, a Lebanese citizen managed to cross the border and walk 10 kilometers until he reached a bus station in Kiryat Shmona. It shows that all these means are worn out. They discovered that their means, their technology, their army and their security are weak."

According to the head of the Lebanese terrorist organization, the construction of a fence from Rosh Hanikra to Mount Hermon "is an admission of Lebanon's crushing victory and the admission of Israel's defeat."

The Lebanese news website Al-Nashra reported that civilians in Lebanon had received a phone call from an unidentified number during Nasrallah's speech, saying: "Our martyr killer is now delivering a speech to you."

The news website claimed that the number in question allegedly belonged to Hezbollah's information department. The Lebanese news website Al-Mulhak even posted WhatsApp messages received by Lebanese: "Nasrallah the murderer continues to lie."

Nasrallah's speech marked the occasion of the first anniversary of the assassination of Mustafa Badreddine, head of the organization's military wing. "He is with us in our hearts and minds all the time," said the Hezbollah secretary-general. "We live thanks to his great sacrifice. He is the commander and fighter in every arena."

Nasrallah implicitly referred to the claims, which were supported by Israel, that Hezbollah had eliminated Badreddine. "Mustafa Badreddine has been in charge of resistance operations for years," he said. "It's natural that the Zionists are trying to hurt him in revenge for their defeats."

Nasrallah further said that any future conflict between the Shiite group and Israel could take place inside Israeli territory, at a time of high tension between the arch foes.

In the live televised speech, he also said that the group had dismantled all its military positions along Lebanon's eastern border with Syria, and this area was now the "responsibility of the state."

Israel "is scared and worried of any future confrontation … and knows that it could be inside the occupied Palestinian territories," Nasrallah said. Two Israeli air strikes against Hezbollah targets inside Syria in recent weeks have raised tension between the two. Nasrallah said the Syrian conflict had entered a new phase, without elaborating, but added that any opportunity to halt the fighting in the country should be seized.

Nasrallah said that "the talk about an Israeli war against Lebanon and Hezbollah is part of the routine psychological war, and this is not new, and Israel has been talking about war for several years now. I say to the Lebanese people and all the people who live in Lebanon: 'Go about your routine lives and trust God.'"