Power outgae in Gaza. There is no shortage of food, but there is no money to pay for it
Photo: Reuters 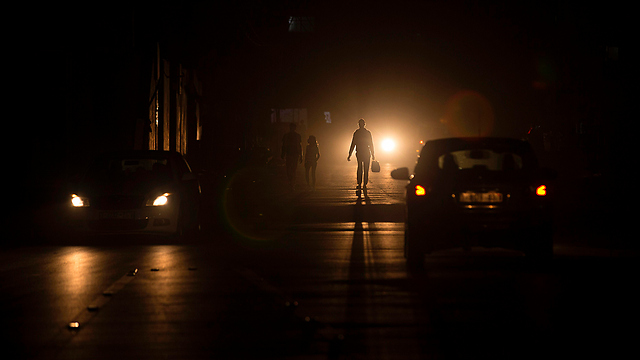 Analysis: Prof. Mkhaimar Abusada of Al-Azhar University believes that the heat, the humidity from the sea and the increasing pressure on Hamas could blow up in everyone’s face in two months’ time. ‘I don’t see them giving up,’ he says.

Prof. Mkhaimar Abusada of Gaza has found a way to deal with the power outages. He has obtained a strong battery which he attaches to a generator. When the battery is full, Abu Saada’s life is in order. “Think about it,” he requests in a conversation from a cell phone that is being charged with that battery. “During the month of Ramadan, we turn upside down. We fast during the day and eat during the night, and the refrigerator works only three hours a day. I have to feed a family of seven. Without electricity, the food will go bad, the children will suffer from intestinal diseases, and I don’t trust our health system. “There are power failures at the hospitals and the clinics too,” he adds.

A Gaza street during a power outage. ‘This Ramadan, there is no available money. Nearly one million unemployed people can’t find a way to make a living’ (Photo: AFP)

Abusada, head of the Department of Political Sciences at the Gaza branch of Al-Azhar University, belongs to the very thin echelon of spoiled Gazans: He has a good salary, a spacious house in the Rimal neighborhood along the coastline, a car (although the fuel is rationed) and an ability to send his five children to private school. He is a popular interviewee on Arab television channels and he knows quite a few Israelis, whom he meets—when he is lucky enough to receive an exit permit—at conferences abroad.

Abusada tells me about the old-new star shining in the alleys of Gaza. He is prepared to swear that Mohammed Dahlan is about to make a comeback and has already been tipped in the strip as the next leader. Only 10 days ago, when Dahlan sat down with the Hamas leadership in Cairo, he checked with them if they would let him return. Not now, Hamas leader Yahya Sanwar said to him, we’re not done. Dahlan is in no rush. He is waiting to have it both ways: Hamas will suffer a blow and grow weaker, and Palestinian President Mahmoud Abbas will disappear. The road to Ramallah will begin by seizing power, at the right moment, in Gaza. According to Abusada’s analysis, Dahlan has managed to create an impressive neighborhood lobby for himself: Israel is grooming him behind the scenes, Egypt is opening gates for him, and Saudi Arabia, the United Arab Emirates and Washington won’t stand in his way. Just like people here predicted, hundreds protested near the border terminal between Israel and Gaza over the weekend. Eight were injured. Hamas worked to convince the media that the power outages, the water supply cuts and the sewage stench were a triangular plot: Abbas is at the vertex, and Prime Minister Benjamin Netanyahu and Defense Minister Avigdor Lieberman are on the sides. When Netanyahu insists that it’s an internal Palestinian conflict, Hamas makes sure that no one will believe him.

Explain to me once and for all, I ask Abusada, why your people aren’t taking to the streets to get rid of the Hamas leadership. “There was a bad experience,” he says, “in the Jabalia refugee camp in January. The power plant was damaged and the aid money from Qatar failed to arrive. Thousands went out to protest, and Hamas responded with arrests and serious torture in the interrogations. Hamas doesn’t care what human rights organizations say about it. It just wants to deter and to curb the ‘Arab spring’ in the strip, that’s all.”

Abusada agrees with the coordinator of the government’s activities in the territories, that there is no shortage of food products in Gaza. “You can get anything you’re looking for at the supermarkets,” he testifies. “Fresh fruit and vegetables, meat and dairy products. The problem is that we’re falling between the Ramallah armchair and the Gaza stool: Abbas issued an order to cut government workers’ salaries, and some 100,000 families fell under the poverty line. Your heart explodes when you pass by the packed food stands, and the head of the household stands there and has to decide whether to buy chees and bread or watermelon. This Ramadan, there is no available money. Nearly one million unemployed people can’t find a way to make a living.” The bad news, according to Abusada, may blow up in everyone’s face in two months’ time. The heat, the humidity from the sea, the increasing pressure on Hamas. “I don’t see them giving up,” he says. They will give us something much more dangerous.