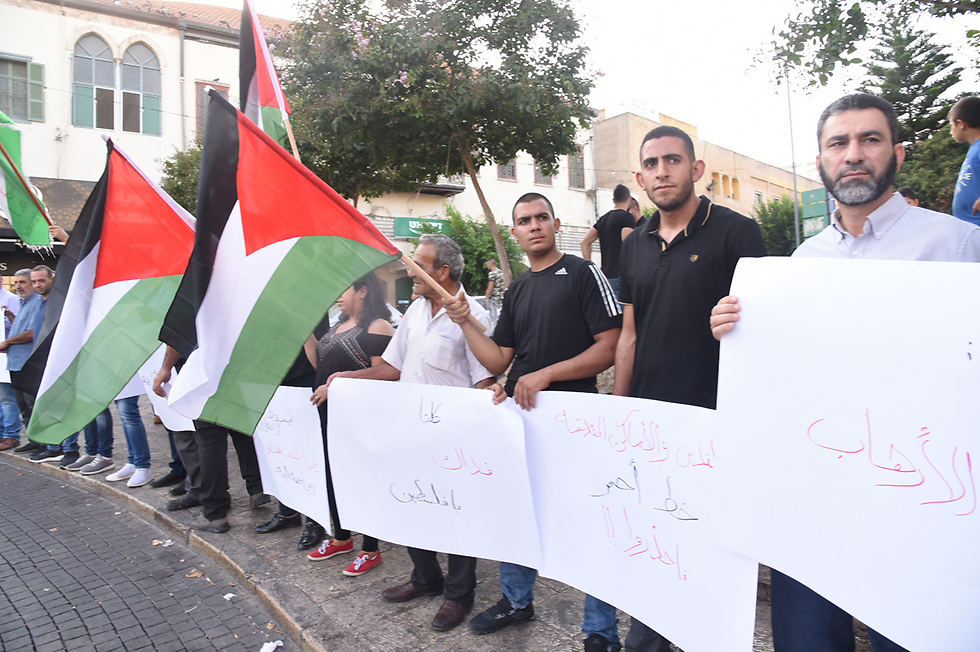 In Baqa al-Gharbiyye, Qalansawe, Tayibe, Nazareth and elsewhere, protesters demonstrated with signs and flags instead of stones and Molotov cocktails; 'The government is treating us like enemies. Violence begets violence and peace brings security and calm,' says one protester.

Hundreds of Israeli Arabs held protests on Saturday evening against Israel's decision to add metal detectors at the entrance to the Temple Mount.

The protests, which were peaceful unlike rioting in the West Bank and east Jerusalem, were held in Baqa al-Gharbiyye, Qalansawe, Tayibe, Nazareth, and the Na'ama junction in the Galilee, among other place.

Some of the protesters waved Palestinian flags and called out, "We will sacrifice our lives for the al-Aqsa Mosque" and "A people led by Prophet Muhammad will not lose."

Others had signs saying, "Al-Aqsa is ours," "We'll continue the struggle without hesitation" and "Don't hurt the al-Aqsa Mosque."

"I think (Prime Minister) Netanyahu has succeeded so far in only one thing—putting the intifada in the headlines instead of investigations (against him)," said Abed al-Munam Muassi from Baqa al-Gharbiyye. "We condemn any type of violence, we're peaceable people. The al-Aqsa Mosque holds great importance to every Muslim in the world, and it's not fair that those who come to pray are made to go through a metal detector. It's just insulting and abusing people who are coming to the mosque to pray. The government is treating us like enemies, and that's a shame. Violence begets violence and peace brings security and calm."

Another protester from Umm al-Fahm had similar grievances. "The government treats us like criminals and terrorists and insists on continuing with its failed ways," she said. "I think the metal detectors were not meant to prevent terror attacks—it's a result of racism and need to humiliate us. The public security minister failed in curbing violence and crime, and now he wants to be seen as a hero at our expense. We'll foil this move at any cost."

Protest in Kafr Kanna
Ahmad, a resident of Qalansawe, said that while Saturday's protests were peaceful, "if the situation at the al-Aqsa Mosque doesn't return to normal, neither will we. We'll stop working and do whatever it takes to stop what's being done to the mosque and worshipers. It would be better for the government to respect us and not humiliate us."