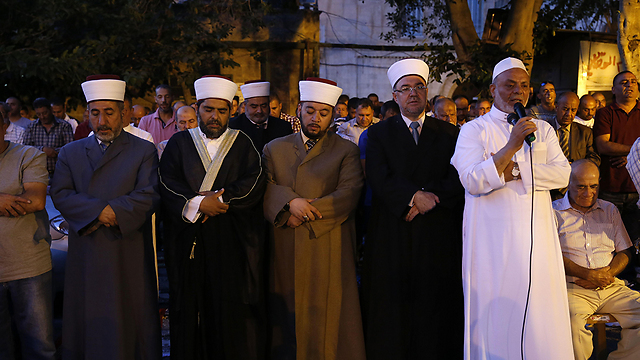 Analysis: In the not-so-distant past, the Muslim religious leadership in Jerusalem held a regular pragmatic discourse with the Israeli establishment. Many fires were put out in those meetings. After the Temple Mount crisis, it turned out the contacts on the Israeli side had either been erased, debilitated or become dysfunctional, and that the Waqf is no longer interested in a dialogue.

Last weekend, when Israel removed the metal detectors from the Temple Mount entrances, the Palestinians recorded another victory. The police, after lowering the security check level, ignored—intentionally or unintentionally—the entry of some 80 members of the Al-Mourabitoun movement, which was outlawed several months ago and has served for years as a key element in the incitement against Israel. But here, this serious incident was swept under the rug. Everyone involved in the metal detector failure prefers to remove the affair from the agenda, so there’s little chance that anyone will draw real conclusions from it. We’re burying our heads in the sand, but the failure is chasing us. As time goes by, the pile of damages left behind by the metal detector affair is growing. And this isn’t about the Palestinian winners’ joy. A state of mind, after all, can be ruined in an instant. These damages, which it’s still hard to assess, are already leaving their mark on the ground.

For years, even if some of the Muslim religious leaders voiced radical statements against Israel, behind the scenes they engaged in horse-trading with us (Photo: AFP)
The Palestinian public realized, for example, that it was neither Hamas nor the Palestinian Authority that succeeded in leading the battle against Israel and bringing it to its knees, but rather religious leaders. This public, at least in east Jerusalem, suddenly has an effective alternative leadership to replace the political leadership. Where will it lead? Will more religion-related crises take place? In the not-so-distant past, there used to be a regular pragmatic discourse between the Muslim religious leadership in Jerusalem and the Israeli establishment. Both sides had contacts. After the Temple Mount crisis, it turned out that the contacts on the Israeli side had been either erased or castrated or had become dysfunctional. Until the recent affair, there were three centers of power in the Muslim religious leadership: Sheikh Omar Al-Kiswani, the Waqf representative on behalf of Jordan who runs the Temple Mount; Sheikh Muhammad Hussein, a Palestinian Authority representative who serves as Jerusalem’s grand mufti; and Sheikh Ekrima Sabri, the former mufti, who represents today the Islamic Movement in east Jerusalem. He is affiliated with the Mourabitoun movement and with the Israeli northern Islamic faction. Each of these three men represents his own interests, which are not necessarily shared by the rest. The Temple Mount events united them. For years, even if some of them voiced radical statements against Israel, behind the scenes they engaged in horse-trading with us: Starting from agreements on riots at the mountain to issues of property and lands of the Muslim Waqf. Many fires were put out in these meetings. The officials on the Israeli side included advisors on Arab affairs in the Jerusalem District Police, in the national headquarters and in the Jerusalem Municipality. The Civil Administration’s advisor on Arab affairs in Judea and Samaria was one of the active officials vis-à-vis the Waqf, which made it possible to monitor the state of mind of the Palestinian public in the city. The lists also included the Central Command’s intelligence officer and the Shin Bet. In the past, there was even a committee on Jerusalem’s security, chaired by the mayor, which brought all these bodies together. All the contacts on the Israeli side were coordinated. After the Temple Mount terror attack, the political echelon should have demanded that these bodies deal with the problem through a pragmatic—rather than political—dialogue with the Waqf. That didn’t happen, because they’re not functioning or don’t exist anymore or have been castrated. The Waqf, on its part, no longer has an interest in a dialogue with the Israeli establishment. Further damage which is already apparent is the fact that Fatah has entered Jerusalem after about 15 years in which Israel restricted its activity. Mahmoud al-Aloul, one of the Fatah leaders, has been authorized to spend about $20 million to win the support of business owners in Jerusalem. He has been handing out money to fund property tax and other debts, as well as legal advice vis-à-vis the municipality. Students have been exempt from paying tuition in Jerusalem. The mufti has received an embrace from Fatah, which funds his bodyguards and political activity, including conferences which Jerusalem has never seen before. The Israeli government is so frightened of itself after the Temple Mount affair that it’s treading lightly and watching, with great concern, decades-long activity in Jerusalem going down the drain.