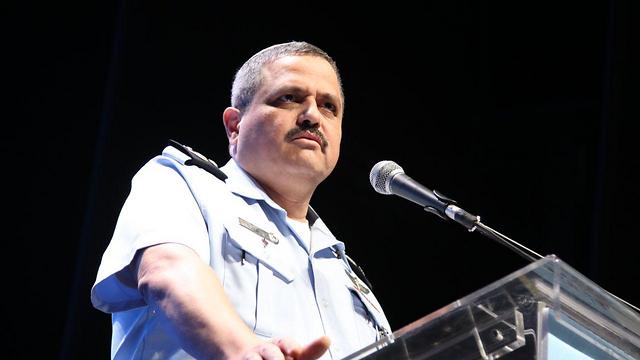 Speaking at the Police National Headquarters, Alsheikh reflected on the violent clashes in Jerusalem that took place between Haredim and policemen on Sunday during the protests, vowing to take action against any officer who overstepped the boundaries of authority.

“If a policeman lost control he will pay for it,” said Alsheikh who viewed the videos showing policemen pushing the demonstrators to the ground, dragging them from the roads and throwing them onto the sidewalks, and at times kicking and punching them.

“I do not justify it. Perhaps there are policemen who should stand trial,” he continued, adding that the ultra-Orthodox demonstrators also displayed “extreme violence.”

“The employment of force against them is unjustified. After the conclusion of the investigation by the Police Investigation Unit we will conduct our own checks,” Alsheikh told his listeners.

The Israel Police launched an investigation into the conduct of police officers and their use of violent methods to disperse the Haredi crowds.

“I have never seen such cruelty by police,” said Moishe Green, a resident of the Ultra-Orthodox neighborhood of Mea Shearim where the protests took place.

Recordings at the protest show policemen pushing the demonstrators to the ground, dragging them from the roads and throwing them onto the sidewalks, and at times kicking and punching them.

Photo: AFP
“The riot police started going wild. All the people did was sit on the roads. They never attacked anyone, they never threw anything. The policemen started punching them. Anyone who managed to get up and try to walk to the sidewalk was kicked in the stomach,” Green claimed. During the violent skirmishes, a 16 year old was evacuated to Hadassah Medical Center having sustained injuries to the head and suffered internal bleeding. He was said to be in moderate condition. Another 17 year old was lightly injured in the riots and was discharged from hospital after receiving medical treatment.

Photo: AFP
“What’s the problem? They are protesting because something is hurting them. Even the policemen understand that the draft law hurts them. So they sat on the road. So what? Lift them up and move them away. Why do you have to go so wild? What is all this cruelty?” Green asked, seemingly disoriented by what he had witnessed. “There was a Jewish man next to them with a white beard who said something to the policemen and they pushed him away for no reason. Even when people were injured and Haredi medics came the police pushed them on,” he said. Green, 35, added that despite witnessing hundreds of protests throughout his life, he had never seen the police respond with such force. “The media has to protect these people. The ultra-Orthodox do not take revenge. They take hits and move on. Someone else needs to talk about what happened there,” he continued. Thousands of Haredim made their way to Jerusalem's Shabbat Square on Sunday afternoon in order to protest the arrest of the grandson of the spiritual leader of Toldot Avraham Yitzchak Rabbi Shmuel Yaakov Kohn for draft dodging.

Photo: AP
During the protests people began throwing rocks at the policemen and prevented the flow of traffic by laying down on the roads as officers were subjected to imprecations from the crowds. Eight were arrested by the end of the clashes. According to another eyewitness called Yosef, the riot police conducted themselves with “brutality.” “I live right near the draft office in Jerusalem and see protests every Monday and Thursday. I have never come across this kind of violence,” he said. “There was no apparent reason for it. There were no attacks on soldiers or policemen. There was only passivity on the part of the protesters. Yosef said it was mainly the young policemen responsible for the “merciless beatings” who he claimed were competing with each other to unleash greater force. “A kind of competition developed between the commanders and the different units over who could use more force. My friend heard one of the commanders says: ‘I want all the police from my station now. If the Border Police know how to act like this, so can we.’”

Photo: AFP
Yosef also recounted scenes of a mentally disabled boy being set upon by policemen. “At one point some poor kid with down syndrome passed by on his way home and a few policemen attacked him and started dragging him to their vehicle for no reason until a more responsible officer came along and told them ‘relax, leave him. Do you not see what you are doing?’”

Yitzchak Weiss, who also lives on the street where the protest took place recalled seeing people bleeding from their heads. “The police behaved wildly and exerted unprecedented force. I saw real sadism there,” he said.

Already before the protest ended, the police announced that they would review the conduct of the policemen during the protest.

"Anything suspected as exceeding authority or employing disproportionate force will be examined to the Police Investigations Unit."