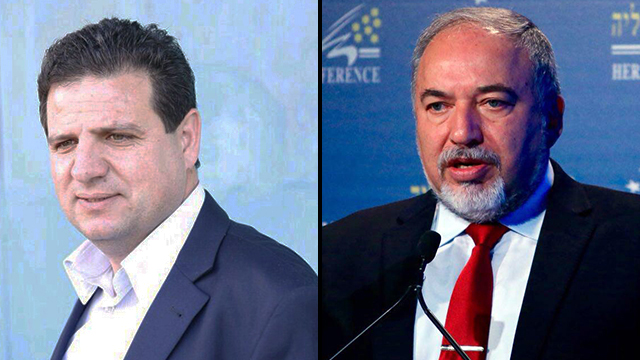 While Israeli Arab lawmakers see the reconciliation attempts between Hamas and Fatah as a sign for possible peace between the rivals, Israeli Jewish lawmakers view it as a cynical attempt to gain favor with the general public.

Joint List Chairman Ayman Odeh—the Arab and Ara-Jewish parties coalition in the Knesset—congratulated Hamas political leader Ismail Haniyeh and Palestinian President Mahmoud Abbas Tuesday over the reconciliation meeting held between the two sides. "I spoke today with Palestinian President Abbas and with the head of the Hamas political bureau, Haniyeh, and congratulated them on their unity" Odeh said, declaring that "anyone who opposes an internal Palestinian reconciliation opposes peace." Meanwhile, Defense Minister Avigdor Lieberman said Tuesday evening that he views the Hamas-Fatah reconciliation attempts very cynically.

Odeh (L) and Lieberman (Photo: Motti Kimchi)
In a ceremony for the opening of the Kinneret preparatory course at Kibbutz Beit Zera, Lieberman said the reconciliation between Fatah and Hamas is an attempt by the two sides to blame each other for why their efforts to help the Palestinian people do not seem to work. "This is not (their—ed) first attempt, and when I look and listen to the public announcements made by Abbas and the leaders of Hamas, (I ask myself), where is the common denominator? "Abbas says: 'I am not willing to accept the Hezbollah model in Lebanon in which we will provide civilian service and Hamas will (be in charge of security).' On the other end, I hear Hamas leaders who say very simply: 'Our weapon, the military wing, is not up for discussion or negotiations.'

"So what is it? It's not reconciliation, it's not negotiation; It's a struggle for public opinion, a continuation of that struggle between Fatah and Hamas and nothing more."

Lieberman then slammed the Joint List, calling the party "a senior representative of terrorist organizations in the Israeli Knesset."

"Unfortunately, the political leadership of Israeli Arabs, as represented in the Knesset by the joint list, has become a (literal) fifth column," Lieberman claimed.

"I call on the silent majority of the Arab citizens of Israel, who are mostly loyal to the state and responsible people, to establish an alternative political leadership that will make it clear that, despite the importance of the Palestinian issue, they are first and foremost citizens of the State of Israel," he concluded.