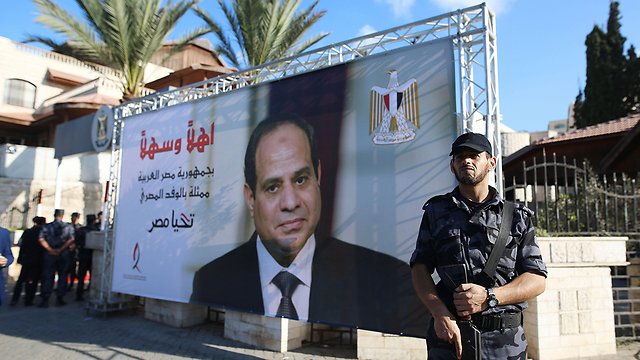 Egypt deepens involvement in Fatah-Hamas reconciliation, as Pres. al-Sisi warns both parties: 'History will pay its debt to anyone who misses opportunity for peace'; PA Pres. Abbas talks careful hope for future: 'I don't want to run for president, but if the people demand it, I will. I'm optimistic the day will come when we'll achieve a Palestinian state, but it won't happen soon.'

President of Egypt Abdel Fattah al-Sisi continues to push for reconciliation between rival Palestinian factions Hamas and Fatah, saying Tuesday in video message shown at a meeting between Egyptian Intelligence Chief Khaled Fawzy and Palestinian Authority Prime Minister Rami Hamdallah, that "history will pay its debt to anyone who misses the opportunity for peace."

"It is necessary that the Palestinian disagreements be resolved internally with the support of the Arab states, and without the intervention of an outside party," he emphasized. "Egypt will invest everything in order to bring about the success of the mission.

"We must work together to emphasize the sincerity of the Palestinian people's adjustment toward a just peace in the region. The whole world is waiting for internal Palestinian reconciliation. We do not have time to waste."

Egyptian soldier standing in front of a poster of Abdel Fattah el-Sisi (Photo: AFP)
Monday's meeting between Fawzy and Hamdallah, which took place in Ramallah, is another in a series of meetings regarding the reconciliation agreement between Fatah and Hamas, signed in Cairo. "We have clear instructions from President al-Sisi to make all efforts to end the division," Hamdallah said. "We thank the Palestinian Authority and Hamas for their cooperation on this matter." Prime Minister Benjamin Netanyahu commented on the reconciliation attempts at a Likud faction meeting in Ma'aleh Adumim, saying the reconciliation will only help promote peace with Israel if the Palestinians recognize the Jewish state. "We expect everyone who talks about a peace process to recognize the State of Israel and of course to recognize a Jewish state," Netanyahu said. "We are not prepared to accept fanciful appeasement in which the Palestinian side seems to be reconciling at the expense of our existence.

Rami Hamdallah and political leader of Hamas Ismail Haniyeh shake hands as Hamas transfers administrative power to the PA (Photo: Reuters)
"Those who want to make such a reconciliation, our message is very simple: recognize the State of Israel, dismantle the military wing of Hamas, sever connections with Iran—which calls for our destruction—and so forth. "These are very clear things (that need to be done—ed), and they're also clearly stated." For the first time since 2014, the Palestinian government convened for a festive meeting in the Gaza Strip, a meeting that symbolizes the acceptance of the PA's civil administration responsibility for the Gaza Strip. Hamas retained responsibility for the security of the Gaza Strip.

The meeting is a ceremonial high point since the declaration of reconciliation between the two factions.

Hamdallah was expected to declare the lifting of sanctions imposed on Gaza, but despite the positive atmosphere and the supreme effort invested by Hamas in the success of the meeting, the sanctions are still in place and PA President Mahmoud Abbas is not in any hurry to remove them.

On Monday night, Abbas was interviewed by the Egyptian media and made it clear that he would not accept the Hezbollah model in Lebanon and that Hamas' military wing and the other factions in Gaza would have to disarm.

"If someone from the Fatah movement in the West Bank carries weapons illegaly, I will arrest them, and that is what I will do in Gaza. There must be only one security force (in the strip)." However, he stressed that there is a strong desire to reach reconciliation with Hamas and that this will be possible by renewing the activity of the Palestinian Authority government in the Gaza Strip. "There is no Palestinian state without complete reconciliation and unity," he added. "The (Palestinian Authority) government returned to Gaza to carry out its duties. We have ideological disagreements with Hamas, but we cannot deny that they are part of the Palestinian people."

"I personally do not want to run in the presidential elections, but if the people demand that I do so, I will. I am optimistic that the day will come when we will achieve an independent Palestinian state, but it will not happen soon."

Abbas' statements was in contrast with the statements made several days ago by senior Hamas figures, including Musa Abu Marzuq, who argued that the dismantling of Hamas's military wing should not even be considered, since it is "designed to protect the Palestinian people."

After the declarations and ceremonies, the substantive stage will begin next week, when Fatah and Hamas delegations will enter into discussions regarding the implementation of the reconciliation. These discussions will take place in Cairo, and will be off the record.