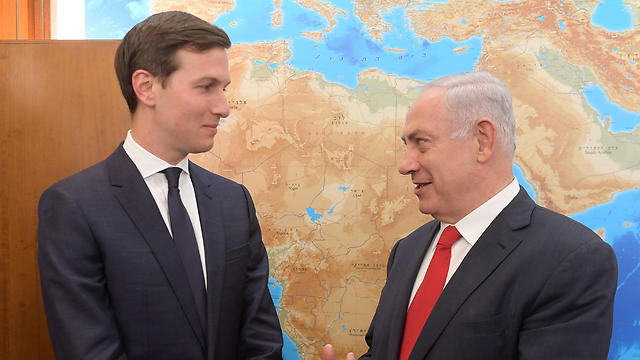 Kushner under scrutiny for alleged contacts with senior Israeli officials

In their report, the paper claimed that several sources involved in the investigation said that Kushner had spoken with senior Israeli officials who sought to thwart the UN Security Council from passing Resolution 2334, which states that Israeli settlement activities in "Palestinian territories occupied since 1967, including east Jerusalem" constitute a "flagrant violation" of international law and have "no legal validity."

According to the sources, Kushner approached foreign leaders following talks with Israeli officials and tried to influence their vote on the council. The report states that the attempts were made concurrently with Trump's calls for Obama to veto the vote, which was held about a month before Trump's inauguration.

Kushner (L) and Israeli Prime Minister Benjamin Netanyahu (Photo: EPA)
The Obama administration rejected his request, and instead decided to abstain from voting.

The resolution, which was approved by a decisive majority of 14-0 council members, opens the way, in principle, to sue Israelis settlers in International Court. It also paved the way for determining methods for monitoring and reporting on Israeli settlement activities, which could lead to sanctions against it.

An Israeli political source told news agencies a few hours before the vote that "President Obama and Secretary (John) Kerry are behind this shameful move against Israel at the UN. The US administration secretly cooked up with the Palestinians an extreme anti-Israeli resolution behind Israel’s back which would be a tailwind for terror and boycotts." "Obama broke decades of policy in which the United States defended Israel at the UN," summarized the official, who asked not to be identified. Shortly after his inauguration, Trump appointed Kushner to lead the peace process between Israel and the Palestinians.

(Photo: Amos Ben Gershom/GPO)
Two weeks ago it was reported that Trump and his advisers had begun to formulate an outline for a solution to the conflict based on the two-state solution, even though it apparently does not commit to the establishment of a Palestinian state. Kushner is currently under scrutiny by the FBI for undisclosed contacts with the Russian ambassador to the United States during and after the 2016 presidential campaign, and has been questioned several times for alleged collusion with the Kremlin to aid the Trump campaign in the elections against Democratic candidate Hillary Clinton. He has also been questioned on suspicions of relying on Russian funds to finance his business activities and is suspected to be the person who advised Trump to fire former FBI chief James Comey who has been looking into Trumps connections to Russia as part of his investigation into Russian meddling in the 2016 election. One of the reasons behind Mueller's investigation into Kushner's contacts with Israeli officials could be related to these current ongoing investigations, as Russia is one of the five countries that could veto the vote on the resolution and thus protect Israel in case the US allows it to continue.