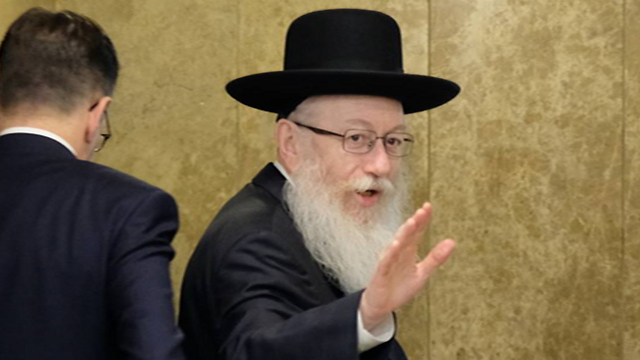 The health minister resigns at behest of religious leader, Hasidic Ger Rebbe Alter, over government-approved train work carried out on Shabbat, which he says 'goes against status quo'; 'Throughout the generations, we knew we were protected by Shabbat,' says Litzman; UTJ official admits that 'if (the Shabbat train works) were done quietly, then there would've been another option.'

Health Minister Yaakov Litzman (United Torah Judaism) tendered his letter of resignation on Sunday morning over government-approved train works done on Shabbat, bringing to an end the first time a Hasidic, ultra-Orthodox leader has led a ministry in decades.

Prime Minister Benjamin Netanyahu said Sunday he will serve as acting-health minister for the time being. The Justice Ministry is working to amend the law to allow Litzman to serve as deputy health minister with a minister's authorities after a 2015 High Court ruling that found such an arrangement to be illegal.

Acting at the behest of his leader, Hasidic Ger Rebbe Yaakov Aryeh Alter, Litzman said Sunday the train work "goes against Halacha and the status quo," and he is therefore left with no choice but to resign.
"Throughout the generations, we knew we were protected by Shabbat, we knew it was the root of the covenant between the people of Israel and G-d. Unfortunately, Israel Railways has recently made Shabbat into 'National Renovation Day': they needlessly do all their renovations on Shabbat," he said.

"All over the world, trains work 24 hours a day, seven days a week, without closing train stations, there is never any need to mess up traffic," said Litzman, who sidestepped the fact that it is the Haredi bloc in the government that stops public transport from running on weekends. "Only here they do this (work on Shabbat) out of spite."

Litzman stressed that railway work had not always been done on Shabbat. "I'm disappointed I couldn't stop the desecration of Shabbat. Shabbat is precious to us all."

Referring to reports he was ordered to resign by his religious leader, Rebbe Alter, Litzman noted the two are nevertheless in agreement over the decision. "I'm an emissary of Torah's greatest scholars, not of politicians, not of anyone. I did what I was instructed to do, what I think is right to do," he insisted.

"The Holy Shabbat is the national day of rest, and we have been taught to safeguard against Shabbat's desecration. Sadly, and with great pain, due to government work that has been carried out in public by Israel Railways for a long time now, I have decided to resign from my position as health minister. I cannot take ministerial responsibility for the public, state-condoned desecration of Shabbat, in opposition to the Jewish people's sacred values, status quo and coalition agreement," Litzman declared.

"I'm happy for the privilege I had to promote and improve Israel's health system," added Litzman. "I acted in every way to benefit those who are ill, without discriminating between populations and communities," said Litzman. "I resign with my head held high, with a sense of purpose, of merit and Jewish calling. I will continue to do all I can for the people of Israel, anywhere and in any way."

An UTJ official admitted that "if (the Shabbat train works) were done quietly, then there would've been another option. But if it is done in a public manner, there is no other option but resignation."

The official accused coalition chairman MK David Bitan (Likud) of "not realizing and not correctly assessing the extent of the crisis. We've been telling him for months: this is an ongoing issue, it's explosive, it's trouble. But Bitan and the Likud failed this test."

Despite the fact Litzman's party, United Torah Judaism, is not quitting the coalition, many Likud officials are worried the current political and public climate would cause irrevocable damage to the government. "Litzman's resignation is the beginning of the end," said one Likud minister. "The general feeling is that everything is falling apart."

"I am sorry for Minister Yaakov Litzman's decision to resign from the government. Litzman is an excellent health minister," Netanyahu said.

"Shabbat is important to us, as are the needs of all Israeli citizens who rely on safe and continuous public transportation. I believe we'll find an agreed upon solution, we're already working on one together," the prime minister added.

While Sephardic Haredi goverment members, such as Shas's Aryeh Deri, have and do serve as ministers, there has not been an Ashkenazi minister in decades, until Litzman's recent tenure.

This was due to a religious decree by leading Ashkenazi rabbis that forbade its leaders from accepting a ministerial position, as it would formally mean they would support and take responsibility for all of the government's decisions—including such decisions that go against their beliefs, such as government-sanctioned works done on Shabbat.

Litzman was left with no choice but to take on the position of minister two years ago after the High Court of Justice ruled that the arrangement according to which he was a deputy minister with ministerial powers was illegal.

Infrastructural and maintenance work on the train done on Shabbat has long been a thorn in Litzman's side.

The current crisis surrounding weekend train works began two weeks ago. The Haredi parties felt the Israel Railways was not sensitive to their needs, leading Litzman to call Netanyahu and set an ultimatum: he would resign from the government if Shabbat train works continue.

As a last minute solution, it was decided last Friday to only have non-Jewish workers carry out the Shabbat works, but the Haredim did not consider this to be an acceptable permanent solution.

On Wednesday of this week, Haredi MKs threatened the coalition would be dismantled if non-vital train work is done on Shabbat. Following negotiations that lasted well into the night Wednesday and continued on Thursday morning between the Haredim, Labor Minister Haim Katz and the Israel Railways, it was indeed decided to greatly reduce works on the train this weekend in an effort to prevent further escalation of the political crisis.

However, while the train work done during the weekend focused on the signaling system, on Saturday some works that are not considered "Pikuach Nefesh" were carried out, including electricity work on the new Jerusalem-Tel Aviv train line.

'IDF soldiers can take the bus'

Infrastructural, maintenance and construction work is regularly done by the Israel Railways on weekends to avoid inconveniencing passengers during the week.

During talks with Netanyahu's representatives last week to prevent Litzman's resignation, he appeared to not worry about inconveniencing passengers.

"They can start working on Thursday night, continue on Friday until Shabbat enters, and work from the end of Shabbat until Sunday morning," Litzman told the prime minister's chief of staff Yoav Horowitz on Wednesday.

"And what are the soldiers who take the train home on Friday going to do?" Horowitz asked.

"They can take the bus," Litzman replied.

While other participants in the discussions confirmed the comments, Litzman's office denied the report, saying: "The minister is not willing to harm train passengers, neither civilians nor soldiers. His only demand is to safeguard the holy Shabbat and to stop turning the Shabbat into the national day of renovations."

A move that could have toppled the government

Litzman's resignation is also a self-influcting wound, as he is said to greatly enjoy being health minister, a position for which he has received a great deal of praise.

Though at present it seems that UTJ is will remain in the coalition, if Litzman's Agudat Yisrael faction decides to resign from the government, it would almost certainly spell the same fate for Degel HaTorah—the Lithuanian and smaller faction within United Torah Judaism. Degel HaTorah's leader is Rabbi Aharon Yehuda Leib Shteinman, who, while considered more of a pragmatist, is over 100 and currently in the hospital in critical condition.

Since the political union between the two Ashkenazi ultra-Orthodox factions in 1992, under the United Torah Judaism party, there has been no precedent where only one of the factions withdrew from the coalition.

The snowball effect could then continue, with Shas—the Sephardi ultra-Orthodox party in the coalition, which normally works in complete cooperation with UTJ on matters of religion and state—also resigning. In fact, Shas leader Aryeh Deri is reportedly furious with Litzman over the danger that his resignation might force both Shas to resign from the goverment.