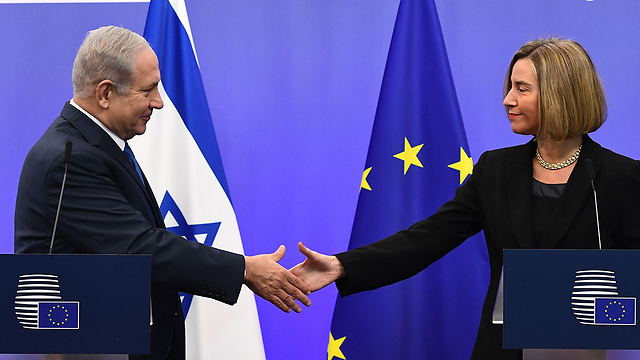 Netanyahu calls on EU to follow US lead on Jerusalem

Ahead of an informal breakfast with EU foreign ministers in Brussels, Netanyahu said Trump's move, condemned by the Palestinians and by European governments, would contribute to peace in the Middle East.

"It makes peace possible because recognizing reality is the substance of peace, the foundation of peace," Netanyahu told reporters as he was greeting by EU foreign policy chief Federica Mogherini before a meeting of EU foreign ministers in Brussels.

Netanyahu said Trump's move, condemned by the Palestinians and by European governments, should be emulated by them.

"It's time that the Palestinians recognize the Jewish state and also recognize the fact that it has a capital. It's called Jerusalem," he said.

"I believe that, even though we don't have an agreement yet, this is what will happen in the future. I believe that all, or most, of the European countries will move their embassies to Jerusalem, recognize Jerusalem as Israel's capital and engage robustly with us for security, prosperity and peace."

The Israeli leader stressed his country's partnership with Europe, saying its intelligence cooperation had helped prevent militant attacks while its security role in the Middle East had curbed Islamic State's expansion in the region.

He also highlighted Israel's economic contribution in new technologies. Mogherini said the EU and Israel were "friends and partners."

A demonstration condemning Netanyahu's visit is planned for later in the morning in Brussels.

Even Israel's closest European allies such as the Czech Republic warned Trump's decision was bad for peace efforts, while France insisted Jerusalem's status could only be agreed in a final deal between Israelis and Palestinians.

Asked by reporters about Trump's decision to switch the US Embassy to Jerusalem, Czech Foreign Minister Lubomir Zaoralek said: "I'm afraid it can't help us."

Last week, the Czech foreign ministry said it would begin considering moving the Czech Embassy from Tel Aviv to Jerusalem, which many in Israel saw as an endorsement of Trump's move.

But Prague later said it accepted Israel's sovereignty only over West Jerusalem.

After a breakfast meeting between Netanyahu and EU foreign ministers, Sweden's top diplomat said no European at the closed-door meeting had voiced support for Trump's decision, and no country was likely to follow the United States in announcing plans to move its embassy.

"I have a hard time seeing that any other country would do that and I don't think any other EU country will do it," Margot Wallstrom told reporters.

EU foreign ministers reiterated the EU position that the lands Israel captured in the 1967 Six-Day War—including the West Bank, east Jerusalem and the Golan Heights—are not part of the internationally recognized borders of Israel.

"I'm convinced that it is impossible to ease tension with a unilateral solution," Zaoralek said as he and his counterparts arrived for a breakfast with Netanyahu. "We are talking about an Israeli state but at the same time we have to speak about a Palestinian state."

"They've announced to us some kind of American initiative. We've been waiting for several months. If it's not the case, then perhaps the European Union should take the initiative, but it's too early to say," Le Drian said.

"Everyone knows that the resolution of the Middle East crisis goes through negotiations and the recognition of two states," he said.

"(Jerusalem) could be the capital of Israel and a future Palestinian state but that has to be negotiated between the two parties," said Belgian Foreign Minister Didier Reynders.

Reynders said that, as the biggest aid donor to the Palestinians and a major partner of Israel, the EU has "a particular role to play" in the dispute.

The EU believes it has a duty to make its voice heard as the Palestinians' biggest aid donor and Israel's biggest trade partner, even if EU governments have varying degrees of sympathy towards Israel and the Palestinians.

Some in Israel see the European Union as being too pro-Palestinian because it insists products made in Israeli settlements must be clearly labelled in Europe.

EU foreign policy chief Federica Mogherini, welcoming Netanyahu on the first visit to the EU by an Israeli premier in 22 years, said the bloc would continue to recognize the "international consensus" on Jerusalem.

She repeated the Union's commitment to a two-state solution and that it was in Israel's interest to find a sustainable solution to its conflict with the Palestinians. The EU, she said, would step up its peace efforts and would hold talks with Palestinian President Mahmoud Abbas next month.

She also condemned attacks on Israel and on Jews elsewhere in the world, including in Europe. Trump's plan to move the US embassy from Tel Aviv to Jerusalem, which the secretary-general of the United Nations said could damage peace efforts, has prompted sometimes violent protests.

Netanyahu to face pressure from EU

The EU foreign ministers are expected to urge Netanyahu to "resume meaningful negotiations," according to Mogherini.

The meeting comes after French President Emmanuel Macron met Netanyahu in Paris on Sunday and called on him to freeze settlement building and to re-engage with Palestinians following widespread protests over the US move. Last week's decision by the Trump administration upended decades of US diplomacy and broke with international consensus. Speaking alongside Netanyahu on Sunday, Macron again condemned the decision as "contrary to international law and dangerous for the peace process."

"I urged the prime minister to show courage in his dealings with the Palestinians to get us out of the current dead end," Macron said after talks in Paris with the Israeli leader.

Netanyahu meets with Macron in Paris (Photo: AFP)
"Peace does not depend on the United States alone... it depends on the capacity of the two Israeli and Palestinian leaders to do so," the French leader said. Netanyahu has praised Trump's decision as "historic" and he explained Sunday that Jerusalem "has always been our capital and it has never been the capital of any other people." "It has been the capital of Israel for 3,000 years, it has been the capital of the Jewish state for 70 years. We respect your history and your choices and we know that as friends you respect ours. I think this is also central for peace," he said.

"The sooner the Palestinians come to grips with this reality, the sooner we'll move toward peace."

Before leaving Israel, Netanyahu had taken aim at what he called Europe's "hypocrisy," for condemning Trump's statement, but not "the rockets fired at Israel or the terrible incitement against it."

Pointedly, Macron began his pre-prepared remarks with a clear condemnation "with the greatest of clarity of all forms of attacks in the last hours and days against Israel."

Despite the obvious differences between the 39-year-old French leader and the Israeli premier, there were also attempts to show they had developed a good early working relationship and held common views.

"Does this mean Emmanuel Macron and me agree on everything? No, not all of it, but we're working it," Netanyahu said at one point, joking later: "The lunch in the Elysee is superb, the conversation is superb too."

The two countries are keen to reset ties after often difficult exchanges under ex-president Francois Hollande.

Most EU members, including the bloc's biggest countries, have expressed alarm over the Trump administration's policy shift.

Mogherini has warned the decision on Jerusalem "has the potential to send us backwards to even darker times than the ones we're already living in."

Speaking to reporters in Brussels on Friday, she repeated Europe's stance that "the only realistic solution" for peace was two states—Israel and Palestine—with Jerusalem as the capital of both and the borders returned to their status before the 1967 Six-Day War.

"It is in Israel's security interest to find a lasting solution to this decades-long conflict," she added.

But the 28-member block is not unified on the issue—Hungary, Greece, Lithuania and the Czech Republic in particular favor warmer ties with Israel.

Last week Hungary broke ranks to block a joint statement from the EU that was critical of Washington's Jerusalem shift.

Trump's announcement on Wednesday has been followed by days of protests and clashes in the Palestinian territories.

Four Palestinians were killed either in clashes or from Israeli air strikes in retaliation for rockets fired from the Gaza Strip.

Tens of thousands have also protested in Muslim and Arab countries, including Jordan, Turkey, Pakistan and Malaysia.

Further protests were held in Lebanon, Indonesia, Egypt and the Palestinian territories on Sunday.

Macron was also asked if France would attempt to launch another peace initiative to resolve the Israeli-Palestinian conflict following failed efforts in the past.

"There's a desire by the Americans to mediate which remains and I don't want to condemn it ab initio (from the beginning)," he said. "We need to wait for the next few weeks, the next months to see what will be proposed.

"And I think we have to wait to see whether the interested parties accept it or not."