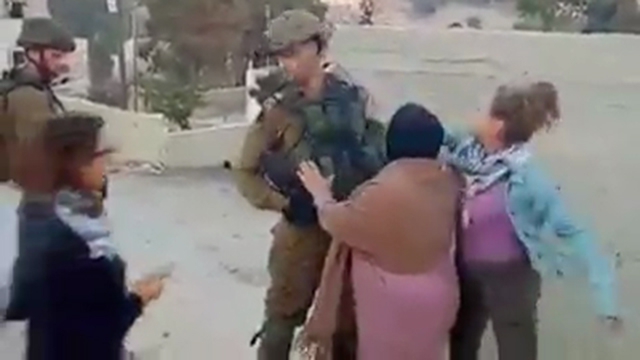 How to deal with the Palestinian camera war

There are situations that can’t end well. The choice is between bad and worse. When a girl slaps an IDF officer in front of cameras, the message this sends causes extensive damage to the army's reputation. These are images we can’t accept. And images are what it’s all about.

Images of “David versus Goliath” are the IDF’s weak spot. That’s the reason the Palestinians invest in them so much and direct them so professionally. If the soldier reacts aggressively, they have earned an edited segment about “brutal soldiers” with the help and support of human rights organizations that are targeting Israel; if the soldier fails to react, they have earned a morale boost for the next children of the intifada and, just as important, bad feelings on the Israeli side. Words can be euphemized, but not images.

The solution is professionalism on the IDF’s part against the Palestinians' professionalism in the battle over public opinion. A Palestinian man who raises a hand must be handcuffed, even if it hurts. A Palestinian girl who hits a soldier must be arrested on the spot and prosecuted as a minor. This means that there will sometimes be less convenient images. It’s a price we can pay in light of the spread of this phenomenon.

The Palestinian camera war has been going on in Judea and Samaria since the first intifada. The presence of cameras and journalists increased the violence. In 2017, everyone has a camera. Some of them are handed out by European organizations. It’s unclear what came first, but it’s clear that an Israeli soldier today deals with a much more complicated situation. If we add that to the recent incidents of Palestinian terrorists hiding in Red Crescent ambulances or in photographer posts, we’ll understand that we’ve gone back to a war with no rules.

In the case of Ahed Tamimi of Nabi Salih, the writing is on the wall—or, to be more exact, the camera is familiar. The girl who provoked IDF soldiers, and was even awarded a Turkish medal for that, keeps going full speed ahead today.

Those who don’t want to see such images and similar dilemmas faced by soldiers should convey the opposite message. Every slap will lead to a documented search and arrest in her home. She will be prosecuted for provocations. If needed, both she and her parents—who have been sending her out for years—will go in and out of military prison forever.

Where there is no determined professionalism, there will be chaos. Sometimes the chaos looks like uncontrolled violence by soldiers, and sometimes it looks like a girl beating up a soldier while he is unable to respond. In both cases, it’s not an individual soldier. It’s the image of the IDF as a whole, and it must be taken more seriously.