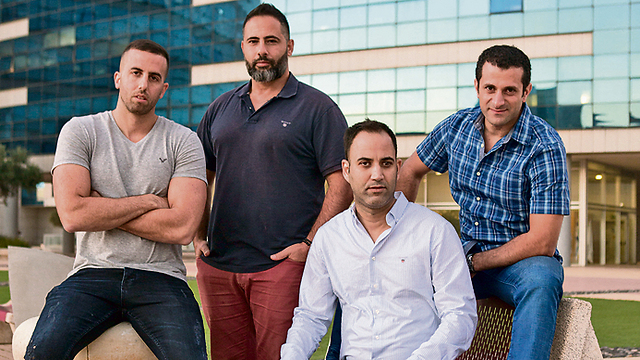 Incensed by the letter written by 63 Israeli high schoolers who declared their refusal to serve in the IDF, 72 combat soldiers wounded in the line of duty signed a response letter, saying, "We, soldiers wounded in defense of the country, call on 12th graders to enlist and help shoulder the burden."

The right-wing Im Tirzu movement, meanwhile, has begun a petition in favor of military service, which has thus far been signed by some 1,000 teenagers. Its petition was joined by a prior anti-refusal letter penned by high schoolers themselves.

R-L: Attiya, Baruch, Bitton and Keshet (Photo: Tommy Harpaz)
In the original letter, 63 draft age youngsters from around Israel sent their letter to Prime Minister Benjamin Netanyahu, Defense Minister Avigdor Lieberman, Education Minister Naftali Bennett and IDF Chief of Staff Lt. Gen. Gadi Eisenkot declaring their refusal to enlist in the IDF due to their belief that it serves to oppress the Palestinian people. "The military carries out a racist government policy that violates basic human rights and imposes one version of law for Israelis and another for Palestinians–on the same territory," wrote the draft refusers. The 12th graders behind the letter are expected to try and recruit more youngsters to join their initiative Tuesday in Jerusalem.

The signees of the original refusal letter held a drive to get new signatures Tuesday (Photo: Lana Turral)
In response to the letter, and to the planned Tuesday signature drive, four wounded soldiers wrote the letter calling on Israel's youth to do the opposite. "The call for refusal strips Israeli society of the value of giving and compromises the country's future," the letter said. "We, the IDF soldiers who were wounded and lay dying in the field, cannot accept the phenomenon of refusal. Those who serve are the 'silver platter' (on which the state was handed to its people, a reference to a War of Independence-era song—ed), not the refuseniks."

The response's originator is Liran Baruch, who served in the Paratroopers Brigade and lost one of his eyes in a stone throwing incident in Qalandiya.

The remaining three are Niv Keshet, wounded in the West Bank when a suicide bomber operated his explosive charge a meter away from him, Ben Attiya, who was seriously wounded in a Ramallah stabbing attack—and returned to combat service 18 months later—and Oren Or Bitton, a former member of the Border Police's Mista'arvim counter-terrorism unit, who suffers from posttraumatic stress disorder.