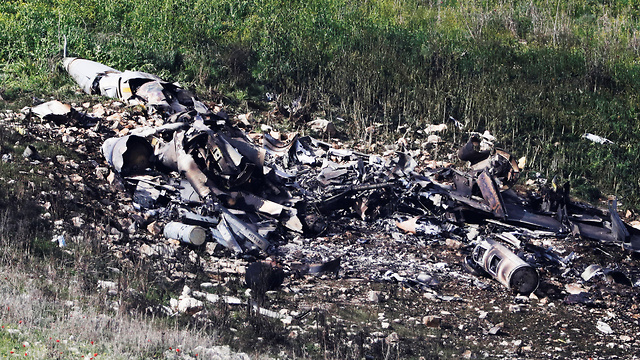 An IAF probe into the downing of an F-16 fighter jet over the weekend found that Syrian anti-aircraft missiles locked onto another of the eight planes carrying out the strike, but that plane was able to evade the missile. Two four-plane formations took part in an airstrike to retaliate the infiltration of an Iranian drone into Israeli airspace on Saturday. Among other things, they attacked the drone's control and command center as well as other Iranian and Syrian targets in Syria.

After bombing their targets, the Israeli fighter jets came under fire by Syrian air defense, with over 20 SA-5 and SA-17 anti-aircraft missiles launched at them.

One missile exploded near one of the planes, leading the pilot and navigator to decide to bail out within seconds, despite not having reported this in the comms system. As the missile did not directly hit the plane, some assessments indicate that had the pilot and navigator taken a different course of action, the plane might not have gone down. However, no conclusions have been reached on the matter yet.

The initial investigation into the incident found that at least one of the F-16 jets was exposed to fire as it was flying at a high altitude to confirm the missiles Israel had launched hit their targets.

One of the Syrian anti-aircraft missiles fired at the F-16 jets (Photo: EPA)
The formation's leading plane noticed the missiles and was able to dive on time and evade them.

One such Iranian target was the military air base in Mezzeh, which is closed to the Syrian army. Iranian "advisers" from the Iranian Revolutionary Guard Corps' (IRGC) Quds Force are stationed there to supervise the transfer of military equipment from Tehran to Damascus and from there to Hezbollah in Lebanon.

Another target was the T-4 air base in the eastern Homs province, 60km east of Palmyra. This is the largest military air base in Syria, which houses IRGC air force teams. The base suffered extensive damage, putting it out of commission after its control tower and 54 runways suffered direct hits.

So far, six military personnel were reported killed in the strikes, some of them "foreigners." Their identities have yet to be revealed. Arab commentators hinted on Sunday that the number of casualties could be much bigger.