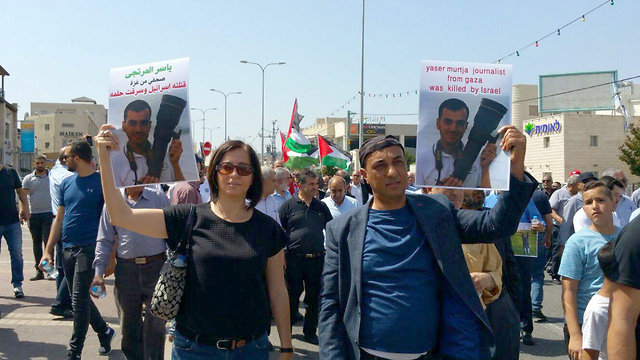 1,500 march in Sakhnin in solidarity with Gaza

Arab journalists, MKs hold up photos of Palestinian journalist Yaser Murtaja, who was killed in Gaza clashes on Friday, saying 'Israel killed him and stole his dreams'; Abed Masarwa from Wadi Ara warns that 'Arabs in such situations are like a ticking bomb that could blow up in the face of such a fascist government.'

Some 1,500 people, including Arab members of Knesset, participated in a protest march in Sakhnin on Saturday in solidarity with the Palestinians in Gaza.

Marchers were waving Palestinian flags and calling out "Gaza residents are heroes," "Oh martyr, rest and we will continue the struggle."

Arab journalists and MKs held up the photo of Yaser Murtaja, a Palestinian journalist killed during the clashes on the Gaza border on Friday, which also claimed the lives of eight others. The photos Murtaja bore the writing "Yaser Murtaja, a journalist from Gaza that Israel killed and stole his dreams."

"Hurting six journalists, wounding them with gunfire and killing Murtaja while he's taking photos away from the fence, indicates decisions and orders that were manifestly illegal," said journalist Wadi Ouadah from Kafr Kanna.

He called on Israeli journalists "to raise their voice in protest of the harm done to their Palestinian colleagues, while they were identifiable as journalists."

"This is a human, moral and ethical obligation of the Israeli journalists to protest and join all seekers of justice and peace, those with conscience and mind. They must ask for an investigation to check who bears responsible for this grave crime," Ouadah added.

Another participant said that "the IDF conduct in Gaza is unacceptable and inhumane. What do they expected from a people under siege for over nine years, without work or livelihood, with no possibility of leaving, flying abroad, traveling and living their lives. Every few hours they have a power outage, even when it's hot or cold."

She claimed Gaza was under occupation because it was under siege. "What do you want from a people living under a harsh and cruel blockade? A people like that could sacrifice their lives for freedom," she argued.

Abed Masarwa from Wadi Ara said what's happening to the Gaza residents "is called genocide. They're being eliminated like cockroaches. Like there is no value for civilians there. But they have a right to live. This government continues making it hard on Gaza and its residents and causes their situation to deteriorate."

He vowed that "We, the Arabs of 1948, will not stand idly by. Leave Gaza, stay away from it. The Arabs in such situations are like a ticking bomb that could blow up in the face of such a fascist government."

The demonstration was organized by High Follow-Up Committee for Arab Citizens of Israel.