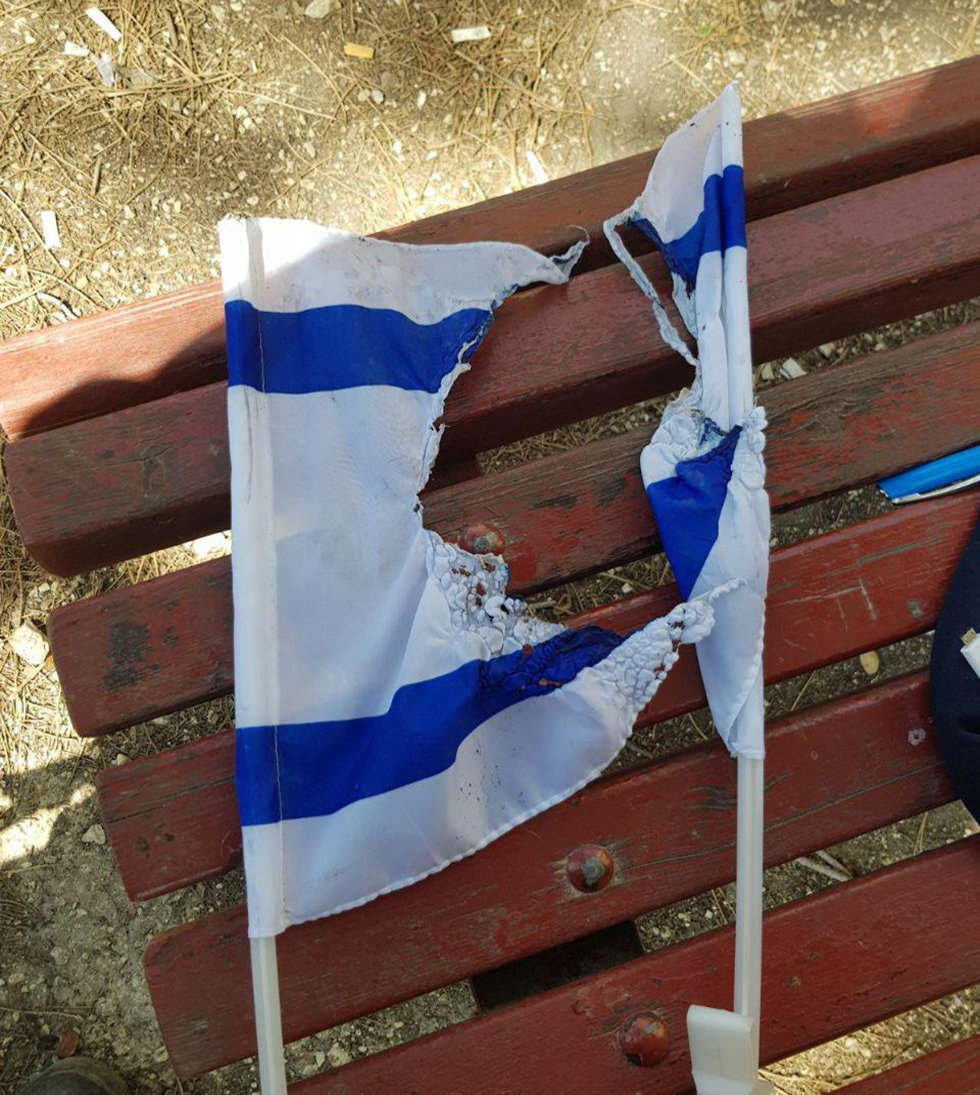 Notices for 70th anniversary of Israel found spray painted in Arab localities, residents wonder: 'What is Israel proud of, the expulsion of our families?' Rahat Mayor: 'These acts have no place;' 3 East Jerusalem men arrested for burning flags.

It was revealed Monday that signs commemorating Israel's 70th Independence Day were vandalized in several locations—mainly in Arab towns in northern Israel. Many Arab residents expressed opposition to publicizing the celebrations, saying: "We recognize Nakba Day (Catastrophe Day—commemoration of the displacement that preceded Israel's establishment), not Independence Day."

"In the past few days, Arab media sources have been harshly criticized for publishing ads for the 70th anniversary of Israel's independence," said Jafar Farah, the Director of the Mossawa Center.

"Hundreds of posts have been published on social networks calling for the removal of such signs from message boards in Arab towns, the same goes for the print and electronic media and newspapers that publicized the notices were harshly criticized. In some places, the signs were vandalized by unknown perpetrators."

Burnt flag (Photo: Police Spokesman)
He added that, among other things, people wrote: "What is the State of Israel boasting of? The expulsion of our families, the massacre at Deir Yassin and Eilabun, the expulsion and destruction of hundreds of villages like Maalot and Iqrit. The campaign in Arabic is the initiative of the Government Press Office.” He further noted that critics claimed that the publication of such ads in the Arab media was meant to hurt those who lost families and homes. "This is chutzpah (impudent) and abuse of the victims of the Nakba. The Jews are celebrating while we visit our villages that were destroyed. There is something defiant and painful about forcing the victors' celebrations on the Palestinian people, who lost their families and their homeland," according to the critics. On Thursday, thousands are expected to participate in the "Nakba March" initiated by the Committee for the Defense of Refugee Rights in the Atlit region, where they will fly Palestinian flags and deliver speeches on the topic. Rahat Mayor Talal Al-Krinawi said he opposes the vandalism of signs that have been hung: "We are residents of the State of Israel and we all have to respect each other, without harming others. Such actions have no place in our society.” He added: "We all have Israeli identity cards, and if the state decided to hang signs on Independence Day, then we must respect that. Anyone who objects, should take steps in accordance with the law." A resident of the Triangle area said: "This country is trying to provoke us with signs. Unfortunately, prominent people in Arab society are participating in this campaign; with such people we have to sever all ties."

3 arrested in Jerusalem for flag burning

In another incident, three young men from Jerusalem were arrested Monday on suspicion of burning Israeli flags. The police received a report that several suspects were observed burning the Israeli flag in the French Hill neighborhood of the city.

Nearby police units located the three suspects and arrested them. While searching the suspects, police found two burnt Israeli flags, as well as lighters that were allegedly used to commit the offense. The suspects, young residents of East Jerusalem, were detained for questioning at Jerusalem central police headquarters. The police said: "The Israel Police will respond with without compromise to any attempt at damaging the symbols of the state, with emphasis on offenses committed deliberately and publicly on the occasion of Independence Day celebrations and that may violate public order."