Four of the winners 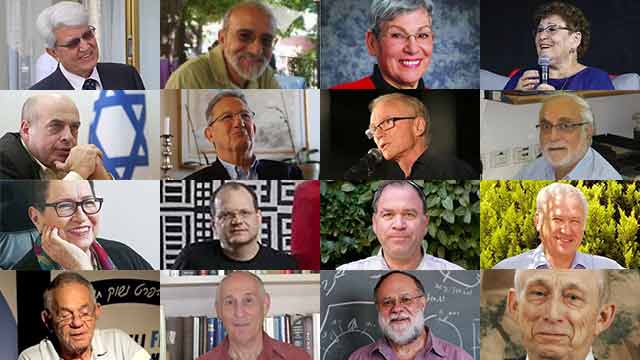 Meet the 16 men and women honored with Israel Prize

Education Minister Naftali Bennett has announced all of the laureates, who will be honored on Israel's 70th Independence Day, with the final list including seven professors, four former MKs and two former ministers.

The winners of the Israel Prize for 2018
A few minutes before the ceremony, Education Minister Naftali Bennett—who selected the committees of judges deciding on the winners of the prize—met all the laureates and congratulated each of them, but when he reached notable left-wing author David Grossman, the conversation between him and Bennett, a staunch traditionalist, nationalist and right-wing politico, was very formal and polite. Grossman, who chastised the government and its leader Benjamin Netanyahu two days ago at a joint Israeli-Palestinian memorial ceremony in Tel Aviv, nevertheless shook Netanyahu's hand when receiving the honor.

Grossman shaking Netanyahu's hand (Photo: Mizmor)
Addressing the friction in an adress given at ceremony's opening, Bennett acknowledged his bias, and confessed to his belief that his path his "the right on." Even so, Bennett stressed, "if there was a button that could be clicked to turn all Israelis to have the same opinion as mine, I would not have pushed it. "We need everyone together. Each side in the debate balances the other side, and elevates it. Artificial tribalism is sometimes perceived as a kind of fate, but it is not. "The right has no monopoly on patriotism just as the left has no monopoly on human rights Not only the Right loves the Land of Israel, and not only the Left aspires to peace. Both of these want the good of the state. An argument between brothers should not turn into hostility."

Education Minister Bennett (Photo: Yoav Dudkevitch)
Then, addressing Israel's youth and future generations, Bennett urged them to "take responsibility; let's talk and not shout. Let's deal with the argument and not handle the ones arguing. We need to remember that we are one family. It is important to note, particularly on this day. "(You can) look at the winners this evening and see how much we stand to lose without unconditional love—but it's much more important that you see how much we have to gain from it."