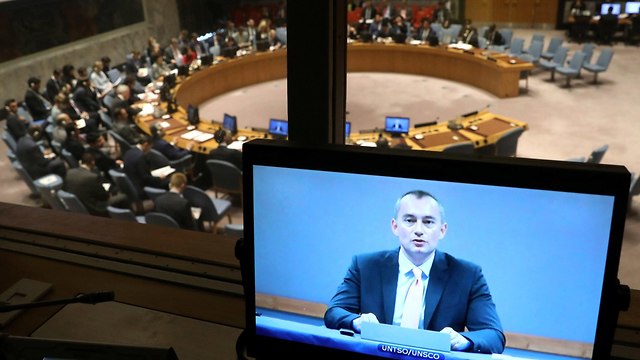 After Nikolay Mladenov urges Israel to avoid use of lethal force 'except as a last resort’', UN discusses in closed talks a Kuwait-sponsored resolution to ‘condemning in the strongest possible terms’ Israel's handling of Gaza riots; resolution makes no mention of Hamas, several council diplomats have called it unbalanced.

The UN's Mideast envoy called Wednesday for urgent action to avoid another Israel-Palestinian war sparked by the violence in Gaza. Nikolay Mladenov told the UN Security Council that "Gaza is on the verge of collapse" and urgent action is also needed to relieve the suffering of its "increasingly desperate" people. Israeli-Palestinian relations are at their lowest point in years in the aftermath of the US Embassy move to Jerusalem and bloodshed on the Gaza border, where over a period of week Israeli fire has killed over 100 Palestinians during mass violent protests since March. Mladenov said the people of Gaza have survived three "devastating conflicts" and have lived under Hamas control for over a decade "with crippling Israeli closures and with diminishing hopes for an end to the occupation and a political solution."

"We must act urgently to avoid another war, to alleviate the suffering of people and to empower the Palestinian government to take up its responsibilities in Gaza," Mladenov said.

The Islamic terror group Hamas forcibly wrested control of Gaza from the rival Fatah party in 2007 after winning legislative elections, triggering an Israeli-Egyptian blockade that has severely restricted the movement of most of Gaza's 2 million inhabitants.

Israel says that the blockade is necessary to prevent Hamas from importing weapons and materials used for manufacturing rockets that could be used against Israeli cities in the future. It also cites that fact that thousands of trucks containing humanitarian aid enter the strip on a daily basis.

Egyptian efforts, backed by the United States, to negotiate a deal that would sideline Hamas and enable Palestinian President Mahmoud Abbas' self-rule government and Fatah party to return to Gaza have failed.

Mladenov again called on all countries to join "in condemning in the strongest possible terms the actions that have led to the loss of so many lives in Gaza" since March.

However, Israel says that the live rounds were fired only at protesters who attempted to breach the border fence or who were engaging in violent activities. Moreover, many of those killed have be claimed by Hamas to have been group members.

According to the UN humanitarian office, in the past month 76 Palestinians, including 11 children, have been killed by Israeli forces and over 3,000 injured by live fire and other means, he said. "This period has seen by far the worst levels of violence since 2014" when Israel and Hamas fought a war, Mladenov said, adding that Israel suffered no fatalities. He stressed that Israel has a responsibility not to use lethal force "except as a last resort under imminent threat of death or serious injury." And he said Hamas must not use the protests to "attempt to place bombs at the fence and create provocations" or to hide operatives among demonstrators and risk the lives of civilians.

In recent weeks, Israel stepped up efforts to prevent such attempts after explosive devices detonated on the border and wounded IDF soldiers.

Mladenov announced new UN efforts to speed up infrastructure and economic development projects in Gaza, improve access to the territory, and support the Egyptian-led process to reconcile Hamas and Fatah. "Gaza's infrastructure teeters on the verge of total collapse, particularly its electricity and water networks as well as its health system," he said. Mladenov stressed that the UN efforts require that all parties observe the cease-fire at the end of the 2014 war "and that all factions in Gaza refrain from illicit arms build-up and militant activity." "If we are able to move quickly, we will reduce the chances of military confrontation and another devastating conflict," the UN special coordinator for the Middle East peace process said.

(Photo: AFP)
This would also create conditions for relaxing movement and access restrictions in Gaza, preserve its links to the West Bank, support reconciliation efforts, and most importantly give ordinary Gazans "much needed breathing space," Mladenov said. He stressed that Gaza is part of "the larger puzzle" linked not only to the need to unite all Palestinians but to bring Israelis and Palestinians back to the negotiating table and end the decades-old conflict. And he warned that "the confluence of conflicts in the Middle East is raising tensions on multiple fronts—in Syria, in Yemen, and, clearly, on the Israeli-Palestinian track." After Mladenov's briefing, the Security Council held closed consultations including on a proposed UN resolution backed by Arab nations that would condemn Israel's use of force against Palestinian civilians "in the strongest terms," especially in Gaza, and authorize deployment of an international force to protect civilians.

(Photo: EPA)
The Kuwait-sponsored draft resolution also calls for "the full lifting of the blockade" of Gaza and demands that Israel immediately stop the "unlawful use of force against civilians, including in the Gaza Strip." It makes no mention of Hamas, and several council diplomats have called in unbalanced.

Kuwait circulated the draft late last week after the Security Council couldn't agree even on a press statement about the May 14 confrontation in Gaza where Israeli troops killed over 60 Palestinians during mass border protests in which some 40,000 people descended on the border, with many flying incendiary kites into Israeli territory. Many were also reportedly armed with guns.

The United States, Israel's closest ally, blocked the press statement and a diplomat said the US told the closed council consultations Wednesday it would not negotiate on the Kuwait resolution, virtually assuring a US veto if it is put to a vote. The diplomat spoke on condition of anonymity because the consultations were private.