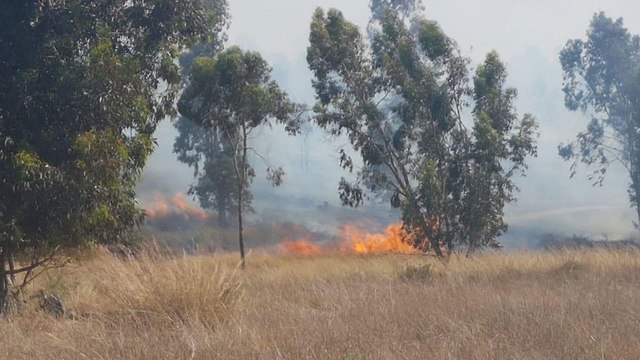 Rivlin calls on Abbas to speak out against Gaza terrorism

While several fires rage near the Gaza border Monday as a result of incendiary kites flown from the strip, and after another infiltration attempt, President Rivlin tells PA leader Abbas 'terrorism coming out of Gaza is a problem of both sides, and we should hear your voice on this issue.'

President Reuven Rivlin urged Palestinian President Mahmoud Abbas on Monday to speak out against the incendiary kites coming from Gaza and attempts to infiltrate Israel from the strip.

"The terrorism coming out of Gaza is a problem of both sides, and we should hear your voice on this issue. We have to see how we can stop the arsons and the infiltrations," Rivlin told Abbas in a phone call. Rivlin also wished Abbas "Ramadan kareem," which means "blessed Ramadan."
Fire rages in Nir Am    (צילום: עופר ליברמן, רועי עידן)
X

Fire rages in Nir Am

Several fires broke out on Monday afternoon in communities near the Gaza border as a result of incendiary kites being flown from Gaza. Firefighters are battling a large blaze in the Be'eri Forest and trying to gain control of it.

Another conflagration was raging near the Sapir College in Sderot, while a third fire broke out near the Sderot train station. Firefighting teams were on the scene, and so far there have been no reports of injuries.

"To alleviate the farmers' situation, we've decided to give them an initial compensation covering 50 percent of the damage, and the rest will be given to them as soon as possible," Kahlon said, adding that incendiary kites are considered an act of terrorism to all intents and purposes.

"So far, 25 claims have been filed covering some 5,000 dunams of wheat, plantations and irrigation systems. All of the claims are in advanced stages of handling," the finance minister explained.

"Our farmers are strong people who've been through tough times and will not be broken by the kites terrorism. We consider agriculture and protecting Israel's lands as a supreme value and an important economic sector," Kahlon went on to say.

Fire near the Sderot train station

Defense Minister Avigdor Lieberman said that Israel is not prepared to accept a reality in which incendiary kites are flown over into the country from the Gaza Strip on a daily basis.

“We should be clear that we are not prepared to accept the kites becoming normality. The same applies for riots on the border fence and attempts to breach it and cause damage to the sovereign territory of Israel,” Lieberman said during his remarks at the Yisrael Beytenu faction meeting.

According to the defense minister, 600 such kites have been sent from the strip so far, while 400 have been intercepted by Israeli security forces using technological means.

“Two-hundred succeeded in reaching our territory and they burned 9,000 dunams of crops and forests,” Lieberman said.