Documentation of the August 2017 stabbing 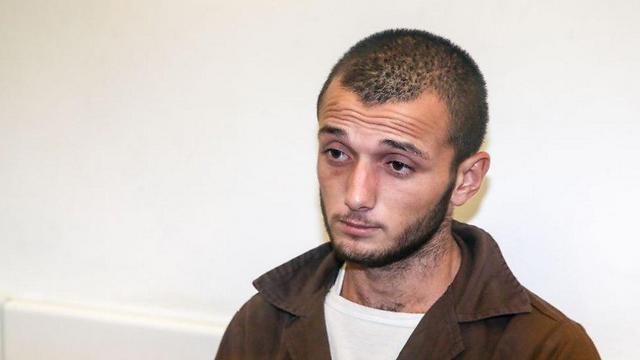 Terrorist sentenced to 22 years in jail for stabbing supermarket employee

Lod District Court orders Ismail Abu Aram, who was convicted of attempted murder as part of a terror attack, to pay Niv Nehemia NIS 200,000 in damages after seriously wounding him at a Yavne supermarket in August 2017.

The Lod District Court on Tuesday sentenced Ismail Abu Aram to 22 years in prison for stabbing Niv Nehamia at a supermarket in the city of Yavne and seriously wounding him in August 2017.

Abu Aram was convicted in March of attempted murder as part of a terror attack. He was also sentenced to 12 months of probation and order to pay Nehemia a NIS 200,000 fine.

Nehemia said after the sentence was handed down, “I would have been happier if he had received more, if the punishment had been set like in the new terror law, which is 25 years in prison at the most. They could have given him more, but it’s a good sentence, the highest that has been given so far. But had they given the maximum punishment, it would have created maximum deterrence.”

Nineteen-year-old Abu Aram from the town of Yatta near Hebron, who stabbed the 43-year-old Nehamia in the chest, neck and head in the supermarket, was inspired to commit an act of “Jihad against the Jewish-Israeli occupation,” according to the indictment, out of a sense of religious conviction.

As part of his increasingly religious observance, the terrorist embarked on a pilgrimage during the last month of Ramadan and remained in Saudi Arabia for twelve days, the indictment states.

It was also noted that Abu Aram left his home and made his way into Israeli territory on August 2 without the required permit and chose to target a man he was already familiar with as his former employer using a knife and pepper spray.

Abu Aram entered the central city of Yavne using public transport. After failing to locate his former employer at an events hall where he once worked, he decided to carry out the attack against another victim using a knife he stole from the supermarket. The indictment details how Abu Aram entered the supermarket and stole a 15cm knife which he concealed in his pants. Searching for his victim, the terrorist found the deputy manager of the supermarket Nehamia as he was stacking shelves when suddenly he produced the knife and proceeded to stab him multiple times.

Nehamia’s response to the attack was praised in the indictment. “Despite his serious wounds, the victim struggled with the accused, while throwing items at him located nearby.”

During the violent encounter, the knife was broken fell out of the terrorist’s hand. At this point, he pulled out his pepper spray canisters and began spraying his victim in the face while he tried to flee his attacker. Eventually, Abu Aram managed to escape from the supermarket, leaving Nehamia in critical condition before being evacuated to hospital.

Before being taken for treatment, Nehamia screamed out the word “terrorist,” prompting passersby to pursue Abu Aram and eventually subdue him until the arrival of security forces.

During his questioning by the Shin Bet, Abu Aram detailed his desire to murder a Jew and explained the circumstances surrounding his selection of Nehamia as his target.