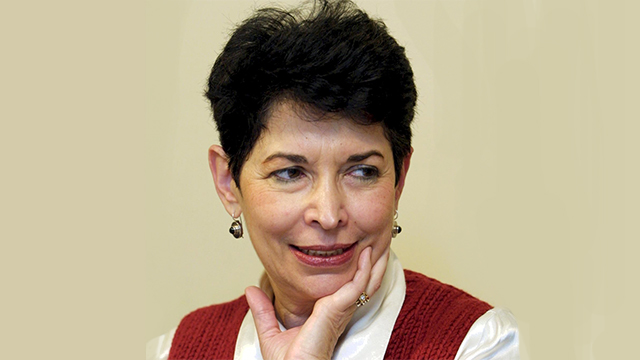 Yad Vashem’s chief historian: 'We can live with parts' of Polish-Israeli statement

Professor Dina Porat, who accompanied the talks with Poland that resulted in the joint statement that partially expunged Polish complicity for Holocaust atrocities, says she did not act as Yad Vashem's chief historian, but was rather asked to give 'personal and discreet advice,' allowing that some parts can stand to be corrected.

Professor Dina Porat, the chief historian at the Yad Vashem Holocaust Memorial Museum, said Sunday that "we can definitely live" with the first part of the controversial joint statement issued by the Israeli and Polish governments, which partially expunged Polish complicity for Holocaust atrocities. The joint statement incurred the wrath of many politicians as well as Yad Vashem. The Holocaust research institute said Thursday that “the attempt to glorify the aid that was given to the Jews and present it as a widespread phenomenon is not only a violation of historical truth, but also of the memory of the heroism of the Righteous Among the Nations.”

Education Minister Naftali Bennet joined the chorus of criticism, calling the joint declaration “a disgrace rife with lies that is offensive to the memory of those who perished."

Prof. Dina Porat (Photo: Oren Agmon)
The statement was the result of negotiations between Israel and Poland in an effort to resolve a diplomatic crisis that erupted over the Polish law, which criminalized suggesting Poland was complicit in Nazi crimes.

The Israeli team that conducted the talks with Poland said in the wake of the public outcry that "Yad Vashem's chief historian, Prof. Dina Porat, accompanied the process from its inception, and the historical statements contained in the joint declaration were approved by her. The joint declaration clearly stipulates that the right to freely conduct research is maintained and that no law prevents this nor will prevent this in the future."

Speaking to the Israel Public Broadcasting Corporation (IPBC) on Sunday evening, Prof. Porat clarified that "I was asked to give personal and discreet advice, I did not act as the chief historian; nor did anyone promise me that every word I corrected would indeed be corrected."

She also rejected reports and claims she stood to gain personally from the statement, stressing "We did not receive money; I do not want to be an ambassador in Poland."

Prof. Porat made it clear that she did not speak to Prime Minister Benjamin Netanyahu before or after the controversy caused by the joint statement.

She insisted that "the first part of the document, at least until article 4, where we started to point to issues, is fine. We can definitely live with it."

"If we could make corrections, there are things to correct, to add, there's no doubt. But not in the climate that was created. That is why I haven't responded so far. It was impossible to say anything in the outrage that was created," Prof. Porat went on to say. The Poles, she explained, "definitely don't want their crimes to be at the center of their perception of self or the center of their identity. They want a different identity."

One part of the statement that particularly drew ire was a sentence that said that "the sad fact is that some people—regardless of their origin, religion or worldview—revealed their darkest side at that time."

"This sentence is very bad and it's not phrased well," Prof. Porat said. "What does 'regardless of their origin' have to do with anything? They were Poles and they were Catholic."

Prof. Yehuda Bauer, one of Israel's top Holocaust scholars, referred to the joint statement as "betrayal," which Prof. Porat asserted was too extreme.

"I'd like to call on him to change this term. Yudaleh, moderate this term because it is inflammatory. The term 'betrayal' is so loaded, so extreme. Would it have been better without the statement at all? Possibly," she said.

Prof. Porat also said she had considered resigning as Yad Vashem's chief historian in the wake of the controversy.

"I've spoken about this to the chairman, Avner Shalev, and to the director general, Dorit Novak, and they did not accept this—and neither do I. I don't feel that there are sins because of which I need to resign," she asserted.

Prime Minister Netanyahu (Photo: Ohad Zwigenberg)
Prime Minister Netanyahu commented on the outrage over the statement on Sunday, saying that "The objective of the talks with the Polish government was to cancel the criminal articles in the Polish law, cast a pall of fear over research and free discourse regarding the Holocaust," the prime minister explained during the weekly Cabinet meeting. "This objective was achieved, and I thank the team of Joseph Ciechanover and Jacob Nagel for succeeding in removing the criminal articles from the Polish law."

He went on to note that "The declaration that was published following the change in the law was overseen by a senior historian. owever, various comments were made after its publication. I have listened intently to the comments of the historians, including about several things that were not included in the declaration. I respect this and I will give expression to it."