The protest against the arrest of a yeshiva student
Photo: Amit Shabi 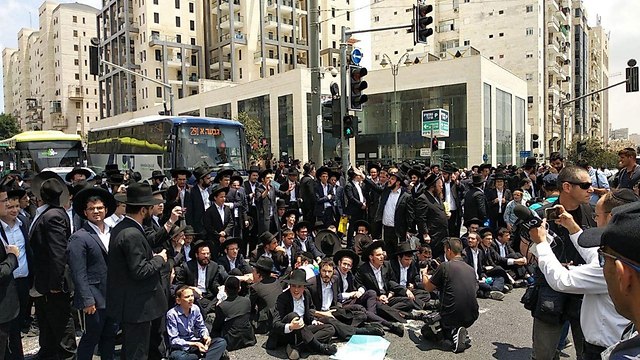 The police arrest the demonstrators in a protest against the arrest of a yeshiva student who refused to enlist in the IDF; 'We will die before we enlist,' they called.

Police arrested 46 Haredim activists following the ultra-Orthodox Jewish protest against the arrest of a defector on Thursday afternoon.

The demonstration that blocked the junction of Jaffa-Sarei Yisrael streets in Jerusalem came to a close.

The demonstrators protested against the arrest of a defector—a yeshiva student—by confronting the police, shouting "We will die before we enlist" and blocking the Jerusalem Light Rail's route.

In addition, another protest of ultra-Orthodox Jews is taking place in the northern city of Safed, with the attendance of a few dozen activists.

The demonstrators protest at Ganei Hadar Square, at the lower entrance to Safed, and occasionally go down to road 89, disrupting traffic.

The police arrested three ultra-Orthodox men who were involved in blocking the access road to Ziv Hospital in Safed.

According to the police, a knife was found in the possession of one of the detainees who is a minor.

The Committee to Save the Torah World declared a "huge protest" in Jerusalem and Safed following the arrest of an unruly yeshiva student who refused to attend the IDF Recruiting Center as part of his protest against the draft bill.

The committee, who defines the current situation as a "spiritual holocaust," is affiliated with the Jerusalem-based Lithuanian faction

According to a statement made by the committee, "the goals and quotas set out in the recent draconian recruitment laws are a terrible decree aimed at destroying and weakening the ultra-Orthodox public."