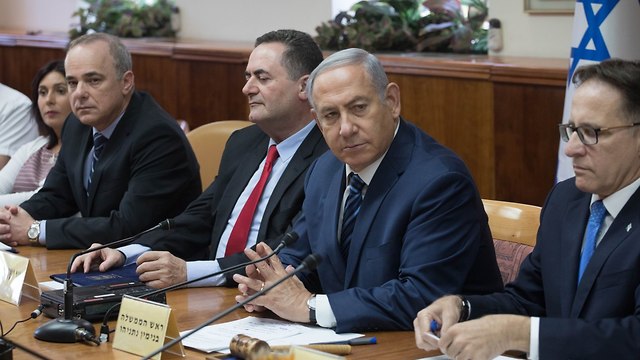 Approval authorizes the Ministerial Committee for Legislation to prepare the proposed law, which includes cuts to yeshivot’s budgets and economic incentives to encourage enlistment, for its first reading at the Knesset on Monday; Attorney General Mandelblit warns the plan could face considerable legal difficulties.

The government on Sunday approved the IDF draft bill, which includes planned cuts to the yeshivot's budgets and the use of economic incentives to pressure the Torah study institutions to encourage enlistment, but no criminal sanctions.

Shas leader Aryeh Deri, who accidentally abstained, asked to change his vote later on to a vote against the proposal.

The Knesset will vote on the bill in its first reading Monday, and ultra-Orthodox parties have threatened to vote against it. Yair Lapid’s opposition faction, one the other hand, plans to vote in favor of the law.

Attorney General Avichai Mandelblit clarified again Sunday that he would not strike down the law from a legal perspective, but warned that it could face considerable legal difficulties. The attorney general said the economic sanction system, which will only take effect in 2020 according to the proposal, raises difficulties and fails to address the concern that whatever is cut in governmental support may be transferred in different funding channels.

Minister Deri said during the discussion that the draft law was tearing the ultra-Orthodox society apart.

“It’s unthinkable that the High Court keeps intervening. The notwithstanding clause must be passed. The Haredi MKs are experiencing a nightmare on the Haredi street. A lot of professional work has been done, but changes must be made,” he said.

Minister Yoav Galant of Kulanu responded, “The army was used to write the law, and that’s a violation of the most sacred thing. I accept that any political arrangement can be made and I support it, but I refuse to make the IDF part of the committee for political purposes.”

A surprising issue was raised during the discussion when Defense Minister Avigdor Lieberman said women were assigned as tank commanders in the field brigades. Education Minister Naftali Bennett asked if they were part of routine security missions or the tip of the spear units, Lieberman said both, but IDF representatives stressed that they were assigned to routine security missions.

“I am in favor of equality and having women as captains and pilots, but the mission is to win the war and not just equality,” Bennett said. “As far as I know, that’s the IDF’s stance too. When was the last time we won a war? I don’t remember many victories since the Six-Day War.”

The defense minister congratulated the committee members representing the IDF and Defense Ministry for “their professional work which the government just expressed its faith in. This is the defense establishment’s law, for security and for the State of Israel.”

‘Yesh Atid begged for motion of no confidence’

Zionist Union faction chairman Yoel Hasson said Sunday that Yesh Atid lawmakers had pleaded with him to turn the vote into a motion of no confidence so that they would be able to vote against it.

Knesset Member Hasson told Ynet, “On Wednesday I was approached by MKs from Yesh Atid, who asked me, ‘Turn the vote into a motion of no confidence.’ They begged me to do it.”

“I won’t say the names of those who approached me from Yesh Atid. They’re not against Lapid, but they think he’s wrong. So they said to me, ‘Do us a favor, make it a motion of no confidence so we can vote against this law.”

MK Ofer Shelah, chairman of the Yesh Atid faction, said in response to Hasson’s claim: “The Zionist Union, which escaped the Haredi draft vote in the previous Knesset and crawled into the government in the current Knesset, shouldn’t preach us—neither about the draft law nor about opposition activity. Yesh Atid will keep working with the state’s best interest in mind.” Coalition Chairman David Amsalem denied Sunday that there was any cooperation between Likud and Yesh Atid on the matter. “There is no dialogue between us and Lapid about the law,” he told Ynet. Prime Minister Netanyahu addressed the issue Sunday morning during a Likud ministers’ meeting, saying: “We will pass the draft law, barring any surprises. I want to pass everything now. On the other hand, there is a desire to postpone.”