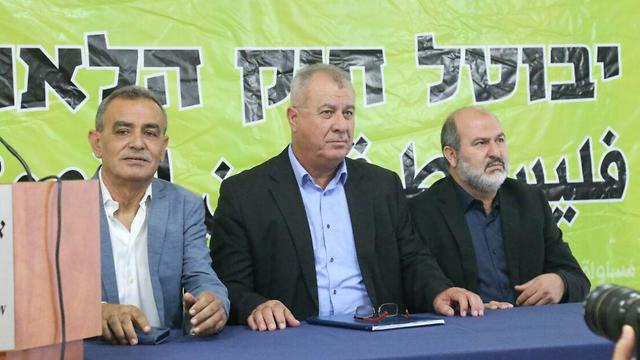 Israel's Arab minority launched their own struggle against the controversial Nationality Law on Tuesday, with the High Follow-Up Committee for Arab Citizens of Israel demanding to cancel it and Adalah petitioning the High Court of Justice against it. "We're saying these things not on behalf of a party or a movement in the Arab population, but on behalf of the general Arab public," said former MK Mohammad Barakeh, the head of the High Follow-Up Committee.

Barakeh said he sought the help of EU Foreign Policy chief Federica Mogherini on the matter and that representatives from the committee will meet with her on September 4.

At the same time, the High Follow-Up Committee also turned to the UN secretary-general as well as other international elements, asking them to immediately intervene against the legislation. Speaking at a press conference on Tuesday, Barakeh said that "it may be that in the immediate future we won't witness any changes to the racist conduct of the Israeli government against the Arab public, but parties' platforms are going to be based on a race theory that discriminates against citizens. We demand the unconditional cancelation of the law." Adalah, the Legal Center for Arab Minority Rights in Israel, which petitioned the High Court against the law, said it "has distinct apartheid characteristics" and denies "civil and national rights of Palestinians in their homeland." The law, passed by the Knesset last month, defines Israel as the Jewish nation-state and downgrades the Arabic language to a "special status." Critics say it marginalizes the country's Arab minority, while supporters say it ensures the Jewish character of the state for generations to come. Tens of thousands demonstrated against the law in Tel Aviv on Saturday, calling for it to be amended to ensure equality for the country's minorities.

Attorney Hassan Jabareen, the general director of the Adalah organization, who filed a petition to the High Court of Justice contesting the Nationality Law, said that the petition was submitted after a comprehensive review of all the constitutions enacted worldwide since the 1990s.

"The apartheid regime in South Africa submitted a constitution in 1983, which emphasized that South Africa is the country of whites, ‘colored’ and Asians, and that the official language is English. That constitution was a crime against humanity because it ignores the black and native population. We claim that the Nationality Law is a racist law comparable to the laws duirng the apartheid era,” he asserted.

“The Nationality Law is a basic law that paves way for a constitution and it gives a racist context to everything. It is impossible to talk about democracy when there is a basic law such as this one. The law changes the entire constitutional structure and therefore we are demanding from the High Court to repeal it," Jabareen concluded.

Chairman of the Monitoring Committee, Mohammad Barakeh, said that another demonstration against the law is expected to be held on Saturday and he expects that “Arabs and Jews of all denominations and ethnic groups” will take part in the protest.

"The demonstrators will gather at 7:30 PM in Rabin Square in Tel Aviv and continue towards Ibn Gabirol Street and the Tel Aviv Museum of Art, where the main rally will be held. We expect that those who resent and do not accept the Nationality Law, will joins us ... We are convinced that this law will be repealed even if it results in the fall of Netanyahu. There is public opposition to this law as well as international condemnation. It's a law that expresses apartheid views," Barakeh vented.

Barakeh added that the committee intends to meet with representatives from the United Nations since he believes that the Nationality Law threatens the possibility of finding a solution to the Israeli-Palestinian conflict.

"The law undermines the solution to the Palestinian issue because it refers the 'Land of Israel' as a Jewish owned territory, which cancels the possibility for a two-state solution … This challenges the stability of the entire region," Barakeh bemoaned.

MK Jamal Zahalka (The Joint List) also criticized the law and labeled it as “colonial.”

"This is a wicked, colonial and racist law, but Netanyahu has equipped us with a tool that we did not have before. Before, we did not have a law that we could have showcased to the world in order to show how much racism there is in Israel … We will not say a word against the State of Israel because this law speaks for itself,” he explained.

At the start of the event, an Arab citizen burst into the hall, claiming that the representatives of the Higher Monitoring Committee do not represent him.

"You are liars, you are cheaters and you are dictators," the man shouted, and even threateningly approached the committee members. He was later escorted by the event’s organizers.

Meanwhile, Israel is at odds with the European Union on several key issues such as its opposition to the nuclear agreement with Iran and recognition of Jerusalem as the capital of Israel.

Last June, EU Foreign Policy chief Mogherini, had to cancel her visit to Israel after Prime Minister Netanyahu refused to meet with her.

One source said that "Mogherini, whose views are hostile to Israel, was invited to attend the conference of the American Jewish Committee,” indicating she was not actually invited by the State of Israel.