The three Shfaram residents who were attacked on Kiryat Haim beach

Following attack on Kiryat Haim beach, victims explain ‘We decided to show our faces because we are not criminals, but victims,’ while thanking ‘Jews and Arabs alike’ for their support.

The three victims of the attack on Kiryat Haim beach were identified on Monday night as Dr. Muhammad Yusifin, Muatasim Ayoub, and Mawd Ayoub, following a solidarity event in their hometown of Shfaram.

The men said they wanted to show their faces as a statement that they are not "criminals, but victims."

"First of all, I would like to thank all the people and citizens from all over the country, Jews and Arabs alike, who have supported us through this ordeal," Muatasim Ayoub said.

"After we received this outpouring of support from all kinds of people including Jews, Arabs and Knesset members, we felt secure enough to show our faces," he added.

The three sent a message to the law enforcement authorities, calling on the  Israel Police and the judicial system to continue investigating the matter.

The incident occurred last week in the early hours of Thursday. “We were sitting on the beach for about half an hour when a Jewish man walked up to us and asked if we were Arabs. We said ‘yes, what do you want?’ And he just left. We thought that he might be drunk. The man returned shortly after, this time accompanied by many others," the victims said.

“After two minutes, he came back with nine other people with knives, metal chains and bars and just started hitting us,” they recalled.

“They started hitting us with no mercy, in all parts of our body, when we were sitting down. They wanted to kill us, just because we are Arabs,” they said.

“Two Jewish men passed by, pushed them back from us and called the police and Magen David Adom (MDA) paramedics. The two Jewish men gave us water and helped us," they added.

Dr. Muhammad Yusifin said, “It pains me, because in my profession I treat Jews. I have never looked at a man’s origin. I also have Jewish friends and I live among Jews.”

The men also said that the attackers cursed and swore at them as the assualt took place, calling them "Arab dogs," and telling them "don’t stay here.”

Following the attack, the three men were sent to the Rambam Medical Center in Haifa for treatment, where they filed a complaint.

“We didn’t hurt anyone,” they told Ynet on Friday. “They just started beating us for no reason. They almost killed us. We asked them to stop but they kept going. They were only pushed away when other people arrived," they said. 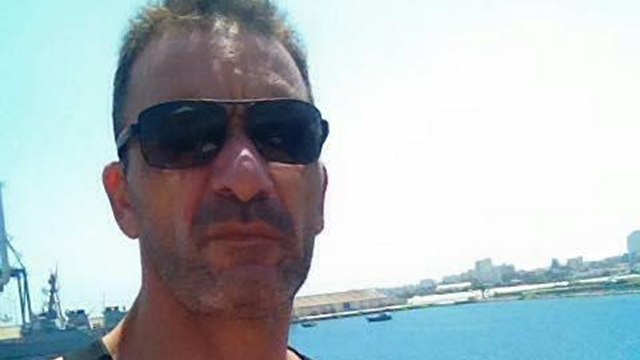 Yair Elalouf helped the three Shfaram residents and stopped the attack. In an interview with Ynet,  Elalouf said that at least 70-80 people witnessed the attack, but none of them intervened or called the police.

According to Elalouf, 8-10 youths attacked the three Arab men. "I saw a group of young Russian men beating (the Arabs) with clubs and chains. They jumped three people there, who were already unconscious on the ground, covered with blood," he said.

"One of them asked for my help, said they were going to kill them. I went there, got the young guys away from there, and called the police. I did what I thought was right," Elalouf added. Elalouf said he heard two versions of what had happened. "One (from people who were there) that they (the Arabs) started it (by provoking) the Russian guys, and another version from girls who said they were there that they (the Arabs) didn't do anything, they were just sitting there quietly drinking. What's the truth? I don't know, I think this is unjustified hatred," he continued.

Later on Sunday, Elalouf met with the three victims at his workplace. "They are very nice guys, they thanked me and asked me where live. They took my phone number and invited me for dinner at their home in Shfaram, the also want to visit my home. I told them they are more than welcome," Elalouf told Ynet.

"People ask me all the time, 'Did you know they were Arabs?' Of course I did, but it doesn't matter. It has nothing to do with that, it does not matter who asked for my help, I would have helped anyone, whether they are Ethiopians, Arabs, or Jews, it does not matter. I wish the country would do the same," he concluded.

The Krayot Magistrates Court extended Tuesday the detention of a 20-year-old resident of the Krayot, who was arrested Monday on suspicion of attacking the three men at the beach. The Judge said that compared to the two other suspects, there is stronger evidence against the latest suspect.

The suspect's attorney confirmed that his client was at the scene of the crime, but says he "denies any involvement in the attack". According to the lawyer, the suspect's girlfriend and his father had been interrogated by the police before his arrest was made. 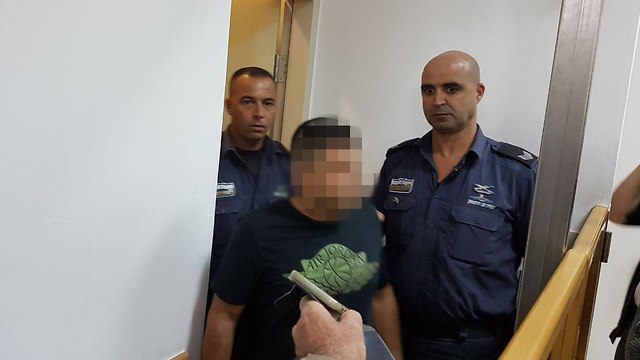 One of the suspects in court (Photo: Gil Nechushtan)

On Saturday, police arrested the first suspect in the case but he was released the following day.

According to the suspect, he was arrested in his home for no apparent reason: "I was not there and I was not involved. I have no idea why they arrested me." At the end of his hearing, the judge sentenced him to house arrest.

The decision was made due to lack of sufficient evidence presented to the court. Similarly, on Monday, the Krayot Magistrates Court released the second suspect to a two-day house arrest.