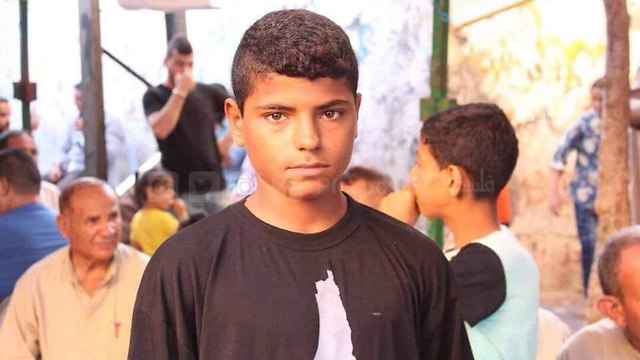 Following release of footage showing 16-year-old Ahmad Abu Tayoor being shot to death by Israeli forces during violent border clashes, IDF says it will investigate events that lead to alleged killing of Abu Tayoor and another Palestinian teen on Friday.

The IDF announced on Saturday it will investigate the claims of a fatal shooting of two Palestinian teens by Israeli forces during violent, weekly riots that erupted along the Gaza border fence on Friday.

“The incidents will be investigated by the relevant command echelons. The cases in which two Palestinians were allegedly killed will be transferred for examination to the IDF's General Staff,” stressed the IDF statement.

Earlier, the Palestinians released footage of an alleged shooting of 16-year-old Ahmad Abu Tayoor, who later succumbed to his wounds, by the IDF during Friday’s clashes.

The footage shows Abu Tayoor throwing rocks at the border fence and shouting at soldiers who were observing the incident from their position on the Israeli side of the border.

The IDF Spokesperson's Unit issued an official response to the incident.

"During violent riots that erupted along the border fence in the Gaza Strip yesterday, IDF soldiers were prompted to use crowd dispersal measures in accordance with the regulations in response to attempts to breach the fence and harm our forces,” added the statement.

"The rioters burned tires and threw rocks and explosive devices at the forces. We are also aware that two people—who took part in violent clashes on Friday—reported to have been killed,” the statement concluded.

Another Palestinian teen was shot during the demonstration in the southern Gaza Strip. The Palestinian health ministry later reported that the teen, 17, was killed by a gunshot to the chest during the riots.

The IDF also said it will question soldiers and officers involved in two previous incidents along the southern border which saw two Palestinian protesters killed during clashes with the IDF forces.

They were summoned to the Military Police for an investigation following a decision of the Military Advocate General on the matter, and battalion commanders, who were in charge of the forces who operated in the area during the events in question, will report for an interrogation in the upcoming week.

The first event took place in late March, during the first wave of protests in Gaza. A Palestinian protester was filmed being shot to death by the IDF, when running towards Gaza and holding a burning tire. A second event happened last month—16-year-old Palestinian was filmed being shot to death while climbing the border fence with Israel. It appears he was not shot by a sniper.

In addition, on Saturday afternoon IDF forces identified four Palestinians who were trying to breach the border fence in the northern Gaza Strip. The IDF Spokesperson's Unit later said the soldiers had arrested the suspects, who were armed with a knife and an axe, and transferred them for further questioning.

Earlier on Friday, IDF Spokesperson's Unit said that IAF had attacked a Hamas observation post in northern Gaza in retaliation to "March of Return" protesters throwing grenades at soldiers near the border fence.

Addressing the exchange of accusations between Hamas and Fatah at the Cairo reconciliation talks, Hamas spokesman Fawzi Barhoum said that the mass participation (of Gaza residents in the "March of Return" riots) and clashes with Israel along the border fence are proof that only those who hold weapons and make sacrifices for their people are the representatives of the Palestinian nation, slamming those who cooperate with Israel.

Senior Hamas official Khalil al-Hayya said while visiting the border fence on Friday, that the patience of the Palestinian people is coming to an end in reference to the siege on Gaza, and that all those involved should "get the message."