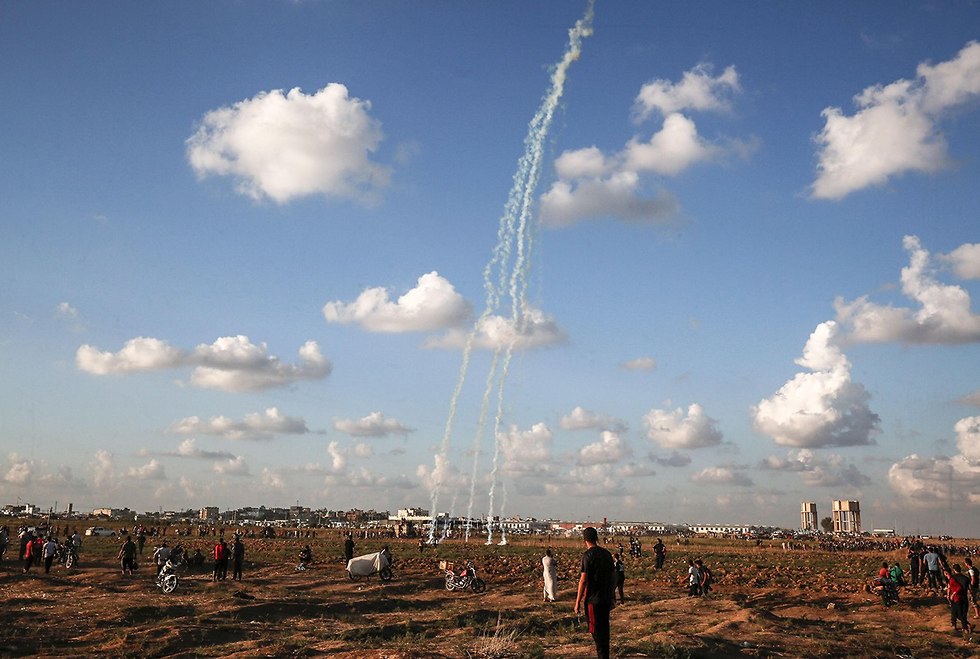 IDF Spokesperson's Unit said Friday that an IDF aircraft had attacked a Hamas observation post in northern Gaza in retaliation to "March of Return" protesters throwing grenades at soldiers near the border fence.

In addition, the IDF attacked a Hamas post in southern Gaza, responding to rioters causing severe damage to infrastructure.

During Friday's weekly riots, thousands of protesters assembled in several locations along the Gaza border fence and hurled Molotov cocktails and grenades at IDF soldiers who responded with crowd dispersal measures and according to rules of engagement.

None of the soldiers was hurt.

Hamas spokesman Fawzi Barhoum said that the mass participation (of Gaza's resident in the "March of Return" campaign-ed) and clashes with Israel on the Gaza border fence are the proof that only those who hold weapons and make sacrifices for their people are the representatives of the Palestinian nation, slamming those who cooperate with Israel.

The Palestinian health ministry said Friday a 17-year-old Palestinian was killed in the southern Gaza Strip by a gunshot to the chest during the riots.

Senior Hamas official Khalil al-Hayya said while visiting one of the locations of the riots that the patience of the Palestinian people is coming to an end in reference to the siege on Gaza, and that all those involved should "get the message."

Earlier, The Palestinians managed to launch an incendiary kite at an IDF communication tower adjacent to the Gaza border fence, sparking a fire.

According to the IDF, no damage was caused to the communication facility.

The attack disrupted a prolonged period of relative calm on Israel’s volatile southern border, after the defense establishment had recorded a significant drop in the number of incendiary balloons from the Hamas-ruled strip that had terrorized Israel’s southern residents and incinerated thousands of acres of farmland and landscape.

The latest launch and IAF retaliation is the first to have taken place in recent weeks.

With details of the progress of the ceasefire talks scant, Gaza’s Hamas leader Yahya Sinwar said on Tuesday that no arrangement has been reached with Israel to put an end to daily hostilities, despite the quiet that has prevailed on the volatile border in recent days.

“I will state clearly: So far there is no agreement and not outline for an agreement for a ceasefire with Israel,” the terror leader during a Hamas conference in the coastal enclave.

Last Friday, thousands of Palestinians took part in the weekly "March of Return" demonstrations along the border fence, with rioters hurling stones and burning tires. A grenade was also thrown at an IDF force, nut injuries were reported.

Israel closed on Wednesday the Erez border crossing in the northern Gaza Strip following violent riots which erupted on the Palestinian side of the checkpoint on Tuesday.

According to the IDF Spokesperson Unit, hundreds of people participated in the riots, reportedly hurling rocks at the crossing which resulted in severe damage to the infrastructure. The IDF said they responded with tear gas and live fire. The crossing will be closed until damages are repaired. Entries will be approved on a case-by-case basis for humanitarian considerations.