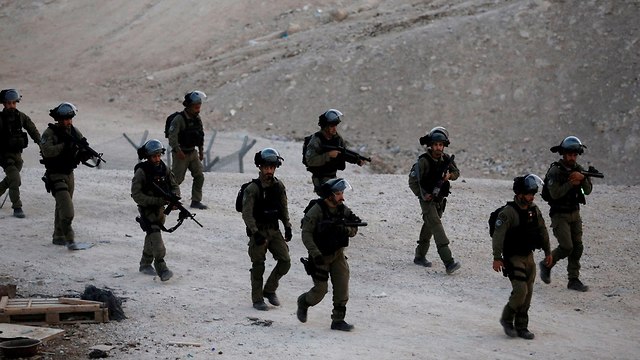 Following High Court of Justice's ruling that Bedouin village of Khan al-Ahmar can legally be torn down, bulldozers move into encampment and dismantle shacks build by Palestinian protesters; Bedouin resident: 'My children are afraid, every vehicle that comes here frightens them.'

Israeli security forces on Thursday dismantled several shacks built by Palestinian protesters near Khan al-Ahmar, a Bedouin village in the West Bank. The move has drawn much criticism from several European countries and the Palestinians, who even filed a war crime complaint against Israel.

Reuters witnesses said Israeli forces arrived at the village before sunrise on Thursday and began taking down the newly built protest huts, without touching the Bedouin encampment, the fate of which has become a focus of Palestinian protests and international concern.

The IDF Spokesperson's Unit said it did not have information to give at this time.

Khan al-Ahmar is located beside an Israeli highway that runs through the West Bank from Jerusalem to the Dead Sea.

"In the process of slaughtering sheep—the sheep are the last to know when their fate is decided. We are now in exactly the same situation—we have no idea when our fate is sealed," Muhammad Abu Dahuk, a resident of Khan al-Ahmar said Thursday.

When asked how he felt about the evacuation of the village, Dahuk said: "I have seven children, they are afraid, and worried…every vehicle that comes here frightens them."

A resident of the Bedouin village (Photo: Amit Shabi)

The five new huts removed by the Israelis had been built this week by activists from several rights groups and the Palestinian Authority in support of the Bedouin community.

Palestinian Protest leader Abdullah Abu Rahmeh said about 200 soldiers converged on the area of the Khan al-Ahmar encampment before dawn, dismantled the shacks and loaded the parts onto trucks. Protesters chanted "Out, out, terrorist army," as the trucks and soldiers left after daybreak.

Last week, the High Court of Justice rejected petitions to prevent the move, paving the way for Khan al-Ahmar's potential demolition. Israel says Khan al-Ahmar was illegally built and in an unsafe location near a major highway and has offered to resettle its 180 residents to a site 12 km (7 miles) away under improved conditions. But critics say it's impossible for Palestinians to get building permits and the demolition is meant to make room for the expansion of an Israeli settlement.

According to the court, no evidence was presented to warrant overturning the decision and there was no question over the illegality of the construction on the site. Therefore, when the temporary injunction forbidding the evacuation expires, the evacuation can begin.

"Khan al-Ahmar will be evacuated! I congratulate the court's decision in light of the orchestrated hypocrisy of Abbas, the Left, and several European countries. No one is above the law. No one will prevent us from exercising our sovereignty and our responsibility as a state."

The encampment has become a rallying cry for Palestinians and focused attention on what critics say is their displacement by Israel in the context of settlement expansion.

COGAT, the Israeli defense body responsible for Palestinian civilian affairs in the West Bank, said its supervisory unit removed the structures, which were placed near the settlement of Kfar Adumim and with the encouragement of Palestinian Authority officials in defiance of the Supreme Court ruling.

The ruling appeared to clear the final obstacle in a case that has been in legal limbo for nearly a decade, pitting what Israel says is a matter of law and order against the Palestinian claims of a creeping annexation of territory they seek for a future state.

Following the court's decision, the Secretary General of the Palestinian Liberation Organization (PLO), Saeb Erekat, said the Palestinians have filed a new complaint against Israel with the International Criminal court (ICC) to investigate Israel's demolition of the Bedouin village.

Erekat added that the Palestinians have asked the chief prosecutor to meet with village representatives and include Israel's actions against Khan al-Ahmar as part of its investigation into possible war crimes committed by the country, and stressed that Israel should be held accountable.

The government's decision has also drawn criticism from some European states, who cite the impact on the community and prospects for peace.

In response to the High Court of Justice's ruling, the European Union (EU) issued a statement:

"We have seen the reports that Israeli High Court rejected yesterday the petitions by the residents of Khan al-Ahmar and will allow the Israeli authorities to proceed with the demolition.

"The EU and its Member States have repeatedly stated their long-standing position on Israel’s settlement policy, illegal under international law, and actions taken in that context, including the demolitions of Palestinian communities and (possible) forced transfers of population. The community of Khan al-Ahmar is located in a sensitive location in Area C, of strategic importance for preserving the contiguity of a future Palestinian state.

"The consequences of a demolition of this community and the displacement of its residents, including children, against their will, would be very serious and would severely threaten the viability of the two-state solution and undermine prospects for peace.

"As the HRVP has said already in July, the EU expects the Israeli authorities to reconsider their decision to demolish Khan al-Ahmar," the statement read.