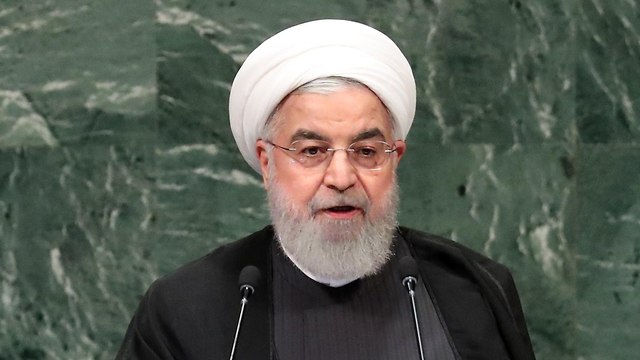 At UN General Assembly, Iranian president accuses Israel of threatening to use nuclear weapons, of being an apartheid state and slams US for supporting Israel's 'countless crimes against Palestinians.'

Iranian President Hassan Rouhani on Tuesday described Israel as “the most terrifying threat to the peace and stability of the region and the world.”

“Israel, which has a nuclear arsenal and is blatantly threatening others with nuclear annihilation, is the most terrifying threat to the peace and stability of the region and the world,” the Iranian president said.

“The countless crimes by Israel against the Palestinians would not have been able to take place without assistance and support from the US,” Rouhani said in his speech to the United Nations General Assembly.

President Rouhani (Photo: Reuters)
He also added that the passage of the years cannot justify what he described as the “continued occupation.”

Rouhani further emphasized that the US decision to transfer its embassy from Tel Aviv to Jerusalem was a flagrant example of Washington undermining regional peace.

He also slammed Israel’s recent passage of the Nation-State Law was another clear example of the country being an apartheid state.

Rouhani criticized Washington for its hostile policy toward his country and said the US approach was doomed to failure.

He  said the United States had waged "economic war" against Iran by reimposing unilateral sanctions, which were lifted under the country's 2015 multinational nuclear deal in return for Tehran curbing its nuclear program.

(Photo: Reuters)
"The United States policy vis-a -vis the Islamic Republic of Iran has been wrong from the beginning, and its approach of resisting the wishes of the Iranian people as manifested in numerous elections is doomed to failure," Rouhani said. President Donald Trump pulled the United States out of the pact in May, and his administration reimposed sanctions on Iran in August. Harsher sanctions on Iran's oil and banking sector are expected in November. "The economic war that the United States has initiated under the rubric of new sanctions not only targets the Iranian people but also entails harmful repercussions for the people of other countries, and that war has caused a disruption in the state of global trade," Rouhani said. "What Iran says is clear: no war, no sanctions, no threats, no bullying; just acting according to the law and the fulfillment of obligations." Mounting pressure from the Trump administration combined with discontent among many Iranians at the state of the economy are rattling the Islamic Republic, with little sign that its leaders have the answers, officials and analysts say. The rial has lost 40 percent of its value against the US dollar since April. Iran has blamed US sanctions for the currency's fall, saying the measures amount to a "political, psychological and economic" war on Tehran.

To pile on the pain, Washington says all countries must end crude imports from Iran by November 4, hitting the oil sales that generate 60 percent of the country's income. Iran says this level of cuts will never happen. Tehran has suggested it could take military action in the Gulf to block other countries' oil exports in retaliation for US sanctions intended to halt its sales of crude. Washington maintains a fleet in the Gulf that protects oil shipping routes.

(Photo: Reuters)
"The security of the Persian Gulf and the Strait of Hormuz has always been important for us ... we will confront any and all disruptive efforts in this critical waterway in the future," said Rouhani. The Strait of Hormuz is a strategic artery linking Middle East crude producers to key markets in the Asia-Pacific, Europe, North America and beyond. A third of the world's seaborne oil passes through the strait in southern Iran. Trump, in his annual UN speech, said he would keep up economic pressure on Tehran to try to force a change in its behavior. But Rouhani said Iran had no intention of succumbing to the US pressure. "The United States' understanding of international relations is authoritarian. ... Its understanding of power, not of legal and legitimate authority, is reflected in bullying and imposition," Rouhani said. "No state and nation can be brought to the negotiating table by force," said the pragmatist president, adding that Iran did not want any war.

President Trump (Photo: EPA)
"Our proposal is clear: commitment for commitment; violation for violation; threat for threat; and step for step, instead of talk for talk," he said. Rouhani expressed Iran's willingness to improve ties with the regional countries. Sunni Muslim Saudi Arabia has been at loggerheads with Shi'ite Iran for decades, fighting a long-running proxy war in the Middle East and beyond that has influenced conflicts in Iraq, Syria, Lebanon and Yemen. Riyadh and its Gulf allies have hailed Trump's decision to exit the nuclear deal and to reimpose sanctions on Tehran, reflecting their concern about Iran's influence in the region. "We believe in the formation of a collective mechanism for the Persian Gulf region with the presence and participation of all regional countries," Rouhani said.