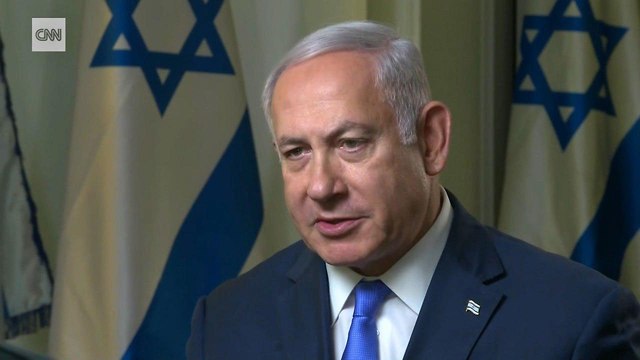 PM to examine US peace plan with 'keen and open mind'

In an interview with CNN, Benjamin Netanyahu says once Trump administration's initiative is put forward, he is going to 'look at it very seriously,' but emphasizes that under any peace agreement, Israel has to remain 'the dominant military power' in the area and have 'the overriding security control.'

Prime Minister Benjamin Netanyahu said on Saturday he will examine the new US peace plan, expected to be revealed by the Trump administration in the coming months, with “a keen and open mind.”

During the interview, Netanyahu addressed President Trump’s comments that Israel will have to do “something that’s good for the other side,” following several decision made my the US president which favored Israel’s position.

"I do not know what the plan will be but once it’s put forward, I’m going to look at it very seriously. I know the Americans are working on it," he exclaimed.

Netanyahu during a CNN interview   (cnn)

Netanyahu made his remarks during a CNN interview conducted after the UN General Assembly in New York, where the Israeli leader made an impassioned speech.

The prime minister was asked about Trump’s admission that he “likes the two-state solution.”

“I’ve discovered that if you use labels you’re not gonna get very far, because different people mean different things when they say ‘state,’” he stressed.

“What I’d like to see is for the Palestinians to have all the power to govern themselves but none of the power to threaten us and what that means is that tiny area, where the Palestinians live and the Israelis live, under any peace agreement, should have Israel as the dominant military power,” the prime minister continued.

Netanyahu was also asked whether he would agree to the two-state solution if the Palestinian state was demilitarized.

“Demilitarized by whom?” wondered the prime minister. “Israeli forces would have to have the overriding security control there.”

Netanyahu also addressed the crisis following the downing of the Russian plane, saying that in his conversation with Russian President Vladimir Putin, he told him “in a very honorable and clear manner that Israel will continue to do what is necessary to protect itself.”

On Wednesday, President Trump said that he liked the idea of a two-state or one-state solution as long as the Palestinians and Israelis could agree, reverting back to the ambiguity surrounding the US peace initiative less than a day after he announced for the first time that he thinks the two-state solution "works best."

"I like a two-state solution. That's what I think works best ... That's my feeling," Trump said during a joint press conference held earlier in New York with Prime Minister Benjamin Netanyahu on the sidelines of the annual UN General Assembly meeting.

Trump explained what he meant regarding a two-state solution: “One of the reporters who was screaming asked me about the one state, two-state, and I said I think the two states will happen. I think it’s in one way more difficult because it’s a real estate deal… But in another way it works better because you have people governing themselves.”

The president mentioned his son-in-law Jared Kushner, his envoy to the Middle East, saying: "Jared who's so involved, he loves Israel ... but he's also going to be very fair with the Palestinians ... Everybody’s got to be happy."