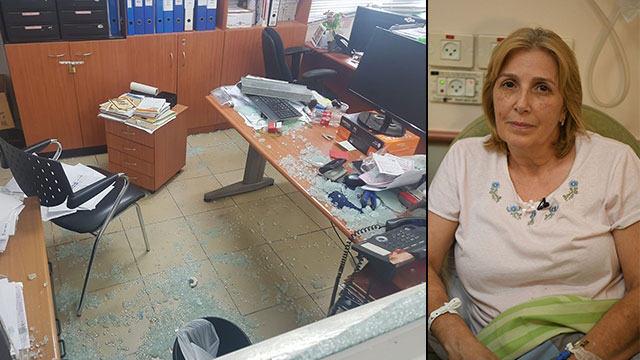 'One Palestinian murders, the other saves'

Sarah Vettori, who was shot in the stomach by terrorist in Barkan attack, says warehouse employee from West Bank tried to stop the bleeding and kept her conscious by stroking her face and whispering 'habibti, habibti'; meanwhile, recycling factory's management decides to close it until further notice.

Sarah Vettori, 54, who was moderately wounded in the Alon recycling factory terror attack, said a Palestinian warehouse worker saved her life by pulling her under the table and helping stop the bleeding with tissue paper.

The terrorist, Ashraf Na'alwa, arrived at the factory in the Barkan industrial area, where he worked as an electrician, shortly after 7:30am Sunday, equipped with an M-16 rifle, and upon reaching the factory's offices, embarked on a shooting spree, killing Kim Levengrond Yehezkel and Ziv Hagbi in the process.

The 54 year old heard heard the gunshots and left her office to see what was happening, and was shot point blank in her stomach by the 23-year-old terrorist, but managed to escape.

Immediately after, Basel, a Palestinian warehouse worker—who hails from the same area of the West Bank as the perpetrator, came to her aid after also hearing the gunshots.

"One is a murderer and the other one saves lives," Vettori said from her hospital bed on Monday in an interview with Yedioth Ahronoth.

Vettori described that she was bleeding heavily as Basel held her hand and pressed a roll of tissue paper into her stomach to stop the bleeding.

"Basel saved my life," she repeated several times. "I was vaguely conscious and Basel, who ran into the office where I was hiding, pulled me under the table and reassured me when he said: 'Habibti, habibti (My dear, my dear).' He stroked my face in an attempt to keep me conscious until the ambulance arrived," Vettori recalled.

The mother of three, was released from the hospital on Monday since it turned out that the bullet that struck her went right through her body. She said the terrorist himself must have been shocked by what had transpired as he couldn't manage to locate her hiding spot.

"I huddled under the table as he entered my office, I saw his legs, his jeans and sneakers. A few seconds later he disappeared and then everything went silent ... If he would have found me, I would not have been here. To my relief, he was in shock and did not even look under the table,” Vettori described.

Soon after the terrorist fled, two warehouse employees—one of which was Basel, came to Sarah’s rescue.

“The same day I was evacuated to the hospital, Basel called me to express his condolences," she said, adding that the warehouse worker himself was taken to a Palestinian hospital and was treated for shock.

Vettori tried to cheer him up during their emotional phone conversation. "I told him, 'You saved me,’ it was important for me to thank him for what he did. He wiped away my blood, tried to keep me calm and talked to me so I would stay awake,'" she stressed.

"When I was lying there wounded, I asked Bassel for a glass of water because I felt thirsty, but he said that water shouldn’t be given in these situations, and when I arrived at the hospital the doctors said it is forbidden to drink water (in the case of gunshot wounds), so Basel was correct,” the 54 year old exclaimed.

Vettori, who plans to meet Basel in person once again soon, wanted to emphasize the importance of the connection between them.

"We must not generalize about all Arabs, so many people called us after the attack, asked for forgiveness, saying they felt ashamed of what had happened. We shouldn't judge all of them by the actions of one terrorist,” the mother of three added.

“I’ve worked with Arabs for many years, and I'm not afraid … they are very respectful people, and many Palestinians I work with told me that they are saddened by what happened to me, and to two other victims,” she reiterated.

Vettori concluded by saying she does not believe the incident will shake the foundation of coexistence that the Barkan industrial zone prides itself on.

“I don’t think it will shake the coexistence we have there …. We will all work together and everything will be fine … This is what I am hoping for,” she asserted.

The Alon Group, which owns the recycling factory where the attack took place, has decided to keep the factory closed until further notice.

"We have decided to close the factory until further notice. The company's management must think about ways to ensure the safety of the employees ... company's management will present its position on the matter. It will take time until the situation is normalized … but we will always remember Kim and Ziv, who fell in the line of duty," said the statement released by the company’s management.

Despite the vision of coexistence, the attack threatens the future cooperation.

"The security forces decide which Palestinians are employable, not everyone is allowed here," said Eran Bodankin, the Alon factory’s operating manager, who was one of the few who came in to work on Monday. "I do not claim to know how they should do their job ... The the factory’s choice should be professional.”

In the nearby factory, Twitoplast, the Jewish employees say they do not fear for their safety even though half of the workers at the factory are Palestinians.

"All the workers came to work, even though the security checks were difficult, which made the Palestinian workers very angry at the terrorist,” said Moshe Lev-Bren, the export manager.

“We’ve had conversations with our Jewish staff and the consensus is that the incident was not nationalistically motivated. They don’t fear for their safety and they trust the Palestinians working here. The coexistence here is preserved,” he explained.

However, less optimistic voices are also being expressed.

"I did not think something like this could happen here. I am scared, who knows what else can occur here. We're talking about coexistence, but to me it feels like sitting on a powder keg," said one of the workers from a nearby factory.