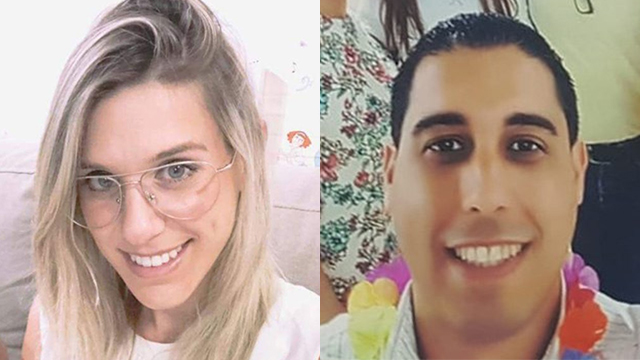 28-year-old woman, and 35-year-old man were murdered in shooting attack in WB; special security forces are still conducting a manhunt to capture assailant.

Kim Levengrond Yehezkel, 28, from Rosh HaAyin and Ziv Hagbi, 35, from Rishon LeZion were identified as the man and woman killed in the terror attack carried out Sunday in the Barkan industrial area in the West Bank by a 23-year-old Palestinian who was employed there.

Kim is survived by her husband and a 16-month-old baby.

Ziv worked as an accountant and Kim was a secretary in the Alon Group recycling factory in the industrial area.

Ziv's parents agreed to donate his organs. He will be laid to rest Monday at 2pm in southern Moshav of Nir Yisrael.

Kim Levengrond Yehezkel
According to the defense establishment's assessment, the Palestinian from the village of Shweika near Tulkarem who killed two people and wounded a third, after which fleeing the scene is still armed dangerous.

Chief of Staff Lt. Gen. Gadi Eisenkot toured the factory where the shooting was executed and held a situation evaluation with the attendance of the military brass, following which it was decided to bolster IDF forces deployed in the area.

IDF forces are currently operating in the terrorist's village, and a manhunt is conducted to capture the assailant.

The terrorist worked for seven months in the Alon recycling factory in the industrial area. The Border Police's counterterrorism special unit Yamam, the elite Duvdevan unit, the counterterrorism Lotar unit, and the IDF's Oketz Unit as well as Shin Bet forces and Central Command and Samaria Brigade soldiers are taking part in the chase to locate the terrorist.

"This was a very severe terror attack in which two Israelis were brutally murdered and a citizen was also wounded," the premier said.

"The security forces are in pursuit of the assailant. I am certain that they will apprehend him and we will deal with him to the fullest extent of the law.

"On behalf of myself and all government ministers I would like to send condolences to the families of the two people who were murdered and our hopes and prayers for a swift recovery for the woman who was wounded," he concluded.

President Reuven Rivlin also addressed the terror attack, saying "I'm appalled and distressed by the horrible terror attack carried out in the Barkan industrial area. My heart goes out to the victim's families, and I pray for the recovery of the woman who survived. This was an attack against the idea of Israelis and Palestinian coexisting, and living peacefully side by side.
Office where terror attack took place
X

"I call upon the Palestinian leadership to condemn this despicable terror attack and to join the efforts of finding the assailant and his accomplices," Rivlin said.

"We will not rest until the law is exhausted with the perpetrators," he added.

IDF Spokesperson Brigadier General Ronen Manelis explained that a chase is being conducted to capture the terrorists, while the Shin Bet is investigating the incident.

Manelis said that despite that the terrorist had a work permit, the fact he managed to enter the factory with a rifle is yet to be examined.

Security forces
"The terrorist might have additional motives (which are not nationalistically-motivated), but that doesn't change the fact this is a terror attack," he added. "This terrorist is armed and experienced and we are investing immense efforts to find him. All evidence indicating this is a terror attack are part of our investigation which we won't elaborate on before the perpetrator is apprehended," Manelis concluded.

"The industrial area is a zone of coexistence where Palestinian with a work permit are employed alongside Israelis. We'll review this incident and decide how to proceed from here. Nevertheless, preserving the coexistence is one of the army's missions," the IDF Spokesperson went on to say.

IDF forces deployed across the area

Defense Minister Avigdor Lieberman tweeted, "The IDF and the security forces are conducting a manhunt to capture the terrorist. It's only a matter of time until we apprehend him (and bring him to justice)."