Pashkevil in Brooklyn against Draft Law 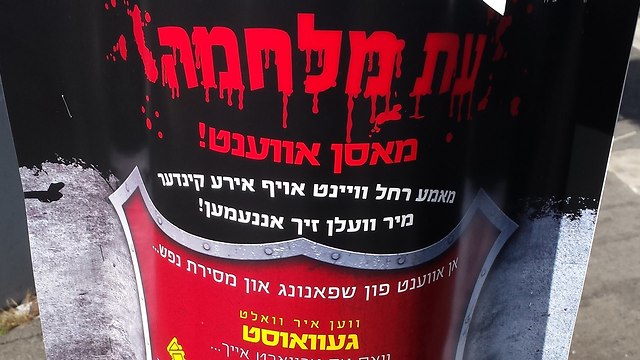 As part of their struggle to prevent the draft of ultra-Orthodox men and women to the Israeli military, radical Haredi activists distribute pashkevils in Brooklyn featuring Auschwitz to encourage fight against bill proposal.

As part of their struggle to prevent the draft of young ultra-Orthodox men and women to the IDF or national service, radical Haredi activists in New York have recently put up pashkevils (posters on public walls) featuring the Auschwitz–Birkenau extermination camp, comparing the legislation meant to draft them to the Holocaust and calling on the public to continue the fight against the bill proposal.

The amendment to the Israeli Defense Service Law passed its first hurdle in the Knesset in July. The legislation includes planned cuts to the yeshivot's budgets and the use of economic incentives to pressure the Torah study institutions to encourage enlistment to the IDF, but no criminal sanctions.

The pashkevils, featuring a train arriving at the entrance of the extermination camp, were hung during the weekend across the Satmar community's stronghold in the Jewish neighborhood of Williamsburg in Brooklyn.

"The train has passed! We'll stop it with self-sacrifice," the poster read.

An additional poster titled "Time of war" promoted a Haredi conference against the draft law, which took place on Saturday evening.

Alongside the usual call to oppose the enlistment of yeshiva students in Israel, the ultra-Orthodox community also focused on preventing the integration of Haredi women into national service or the recruitment of Jewish women to the IDF.

"We are addressing our brothers in Israel, who engage in the sacred work of salvaging the oppressed from those who seek to harm the modest Jewish women," the banner read.

In an effort to raise funds for the fight, the ultra-Orthodox community heads stated that "Everyone who has the power to act should guide the girls on how to carefully behave in order to avoid falling into the military's trap, and how they should act in case the army harasses them."