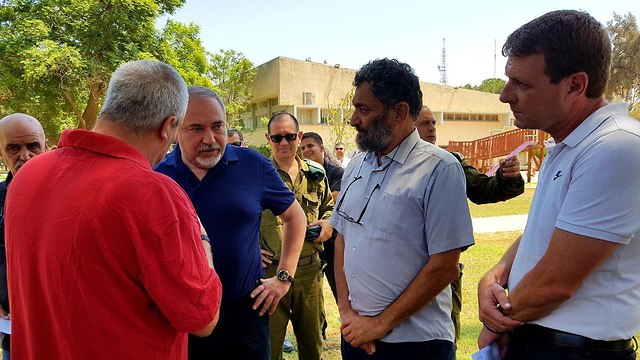 Heads of regional councils on the Gaza border say the defense minister, who announced his resignation on Wednesday, was 'warm and attentive' to them; 'unfortunately, he saw Gaza as a lost battle.'

The heads of Israeli communities along the Gaza border went on the defense in May 2016; not because of a new threat posed by the Hamas terror organization, but because Avigdor Lieberman was appointed defense minister, a position he vacated on Wednesday afternoon. They were concerned that the experienced politician would implement his threats vis-à-vis the Palestinian problem in their back yards.

The residents of Gaza border towns, most of whom are on the center-left part of the political map, were later surprised by Lieberman's performance.

The heads of the regional councils in the area received an official invitation to meet with Lieberman at the Gaza Division base several days after he entered the Defense Ministry. Lieberman was warm and attentive during the meeting.

"He turned out to be a pragmatic, practical, attentive person, who avoided dealing with politics during our meetings and genuinely saw us as the public's emissaries," one of the regional council heads said.

"Lieberman surprised me. Prior to his appointment as the defense minister, I viewed him as a tough man whose sole desire was to erase Gaza and inflict another round of fighting on the Gaza border communities at any cost. However, it turned out that things are not always as they look from afar," he said.

"In my opinion, Lieberman is leaving office with an extensive knowledge of the Gaza Strip and a much wider perspective on things," the regional council head added.

Slowly but surely, Lieberman's relations with the heads of the border communities and the residents grew closer. During almost all of his professional visits to the Gaza Division, the defense minister met with the regional council heads and briefed them about recent security assessments, never hiding any information from them.

In addition, Lieberman used to call the regional council heads once a week, especially following security incidents, asking how the residents were doing.

He didn't do it to score points with the general public, since neither Lieberman nor the Gaza border residents have ever leaked the defense minister's calls to the media.

Over a year ago, the regional council heads spoke to the minister about the importance of reopening the Erez border crossing, with most of them certain Lieberman would reject the move. But the defense minister surprised them once again, giving his consent to the opening of the main crossing for Palestinian workers from Gaza to enter Israel. Opening the Erez Crossing could "ease the economic pressure in the strip as well as improve Israeli agriculture," Lieberman told them at the time. Unfortunately, Shin bet Director Nadav Argaman opposed the initiative, and the crossing remained closed.

Head of the Eshkol Regional Council Gadi Yarkoni (L) and defense minister Lieberman
"During his tenure as the defense minister, he always had a sympathetic ear for us and a deep understanding of our needs. His door was always open to us, and he made sure to maintain personal relationships with us and visit the southern communities," said Gadi Yarkoni, the head of the Eshkol Regional Council.

"The border communities' residents don't feel safe these days. If Lieberman resigned because he couldn't provide us with security, I appreciate that decision," Yarkoni added. "The resounding message to the next defense minister should be that the sense of security must be resorted to the Israeli communities on the Gaza border."

Lieberman's unique relationship with the Gaza border communities has been put to the test over the past eight months over the "March of Return" campaign in Gaza and the arson terrorism that accompnies it.

Another regional council head who wished to remain anonymous echoed Yarkoni's comments, saying that Lieberman "understood the residents' distress and used to speak with us every Friday."

"Unfortunately, he gave the impression the Gaza issue has no solution, addressing it as lost battle," he added. "Lieberman used to say 'The only thing they (the Palestinians) understand is force,' which I disagree with. This approach eventually led him to resign."

"We don't care who replaces him. We only seek to restore calm to our region. We came in peace and prefer to achieve peace through an arrangement and not wars.

However, if needed, we are prepared for a military solution," he said.