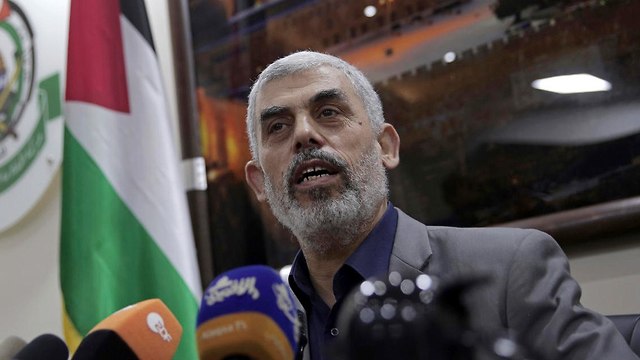 Op-ed: Israeli PR aside, Israel handed Hamas a windfall with its recent policies, blundering the last confrontation and erasing any previous gains. Weakening the PA will inevitably result in a dangerous escalation in the West Bank.

The ramming attack in Gush Etzion on Monday does not necessarily indicate a new wave of terror attacks or a change in terrorist activity patterns in the West Bank. But it serves as another painful reminder of the clumsy and arrogant manner with which Israel conducts itself vis-à-vis the Palestinian Authority.

Israel is building up Hamas, not just in Gaza but also in the West Bank. To be precise: Israel is elevating Yahya Sinwar as the dominant Palestinian leader. And when Sinwar rises, courtesy of Israel, Mahmoud Abbas will lose the last remnants of his support in the West Bank, paving the way for increased terrorism in the West Bank; Tuesday's attack was only an example.

The past two weeks serve as a clear example of this policy of strengthening Hamas and weakening the PA—a policy emanating from the Prime Minister's Office while the defense establishment, for its own reasons, goes along.

Yahya Sinwar (Photo: AP)
On November 13, after Hamas launched hundreds of rockets into Israel and the Cabinet accepted the IDF's recommendation for a ceasefire, defense establishment spokespeople embarked on a PR campaign telling the Israeli public that Hamas was dealt a severe blow, was begging for a cease-fire and could barely overcome the shock upon discovering that Israeli forces operated right under their noses in the Gaza Strip. Perhaps all that is true, but they forgot to mention how Israel turned the vilified Hamas leader into a national hero. Sinwar owes a debt of gratitude to Netanyahu for those wonderful two days of military confrontation with Israel that rapidly caused a dramatic turnabout in his status. Prior to the discovery of the IDF Special Forces operation in Gaza, Sinwar was at a low-point. He was accused of "selling out" Gaza for a fistful of dollars (in the Qatari ambassador's suitcase), and everyone—the Palestinian Authority, the Arab media, the residents of Gaza—ridiculed him and presented him as one who had given up on the Palestinian national struggle. At the same time, the US administration announced a $5 million reward for information regarding the number 2 man in Hamas, Saleh al-Arouri, who resides in Beirut. At the time, Hamas was also willing to make far-reaching compromises with the Palestinian Authority just to survive another day.

Saleh al-Aruri, L
And then, Israel did Hamas a great favor, to which they responded in a bland and predictable manner. The resignation of Avigdor Lieberman from his post as defense minister provided Hamas with the psychological victory it sought, and the day the shooting stopped, Sinwar became the ultimate Palestinian leader. This initiated a very dangerous process, which could lead to an explosion not only in Gaza but primarily in the West Bank. Hamas leaders became overconfident. Al-Arouri, a "wanted man" by the US, arrived in Cairo(where no one thought of turning him over to the Americans) for reconciliation talks with the Palestinian Authority last week, and it turns out that all previous agreements reached between Hamas and the PA over the last year had been erased. Al-Arouri put an end to talks about bringing in PA officials from Ramallah to govern Gaza. Hamas is talking about forming a national unity government now, elections now, joining the PLO now. Moreover, the Hamas delegation headed by al-Arouri is presenting the Egyptians with a list of demands to Israel, demands which Israel will never accept. It seems that al-Arouri is so shocked and embarrassed by the blow Hamas suffered in the last round of fighting—according to Israeli intelligence experts—that he allows himself to make bizarre demands. He demanded, for example, to expand the Gaza fishing zone from 9 nautical miles to 20 miles. The Operation Protective Edge agreements spoke of up to 12 miles. But after the last round, Hamas feels that it has leverage. It also demanded the removal of most of the restrictions on imports and exports of goods from Gaza, as well as another electric power line from Israel—funded by Qatar—fully knowing that Israel cannot do so, since any infrastructure project needs to be approved by the Palestinian Authority. A situation in which Israeli military and political activity strengthens Hamas and weakens the PA makes no sense and forces Israel to formulate a new military and political strategy. When the PA is weakened, the Palestinian security apparatus is weakened, the population in the West Bank becomes more confrontational with the PA, as Israel makes it increasingly clear that violence pays off. From this, the road is short to the inevitable conclusion: a military escalation.