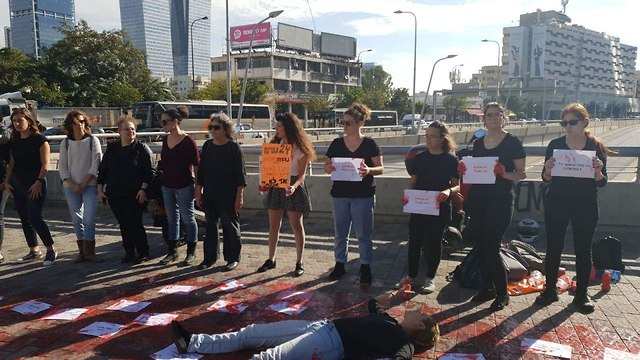 Israeli women to strike in protest against domestic violence

Thousands of women expected to take to the streets on Tuesday to protest government inaction in addressing violence against women; cities including Tel Aviv, Haifa, Be'er Sheva and Jerusalem and many companies and organizations pledge support to campaign.

A nationwide strike in protest of the government's inaction on the issue of violence against women expected to take place on Tuesday has received support from most local authorities across the country, as well as many major companies and organizations.

Since the beginning of 2018, at least 23 women have been murdered—the highest number since 2011, according to the data collected by the Women's International Zionist Organization (WIZO). The statistics also show that in the years 2017 and 2016, 16 women were murdered each year, while 13 were murdered each year in 2014 and in 2015.

Last week, demonstrations took place across the country organized by a coalition of women's rights groups under the title "Degel Adom (Red Flag)." The protest organizers also urged women to go on strike on Tuesday, December 4.

"This is a historic turning point. Tens of thousands of women from all parts of Israeli society are planning to strike on Tuesday to prove once and for all that 51 percent of the population is not a minority,” a statement by the protest organizers said. “On Tuesday, we will demand an immediate solution to violence against women. The government cannot continue to hesitate while women are being murdered."

The protest organizers also called on the government to transfer the NIS 250 million it had promised to allocate to an emergency plan for the prevention of violence against women, which includes rehabilitation programs for victims of domestic abuse and wide-scale reforms in police treatment of domestic abuse cases.

The Tel Aviv municipality was among the first to join the strike, announcing Saturday evening that it will allow its female employees to strike without having their pay deducted.

The move prompted other major Israeli municipalities—including Jerusalem, Haifa, Be’er Sheva, Ramat Gan, Modi'in, Rishon LeZion and many others—to follow suit, allowing their female employees to take a paid leave so they could take to the streets and protest.