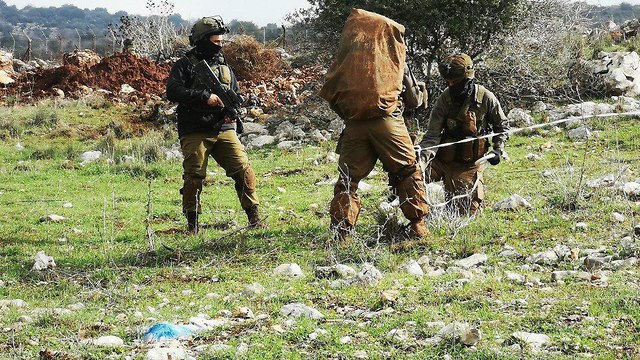 The terrorist organization is documenting Operation Northern Shield at close range; Lebanon claims IDF placed border demarcations on their side of fence; growing assessment: the operation will take several months with an escalation being only a matter of time.

Pictures of IDF soldiers marking the borderline of an enclave— located beyond the perimeter fence at the Lebanese-Israeli border— were exposed by Lebanese TV channel Al-Manar on Sunday. The pictures, which were shot during Operation Northern Shield, were taken at close range by Hezbollah's terrorists.

The Hezbollah associated channel claimed that the Lebanese army had raised the alert on the Israeli border, near the town of Meiss Ej Jabal, after IDF soldiers tried to mark the border in the enclave without the presence of Lebanese army personnel.

According to the report, the Israeli soldiers retreated when the Lebanese soldiers approached. The IDF soldiers then proceeded to place steel border markers a few meters away from the perimeter fence.

The pictures show that Hezbollah terrorists were very close to their Israeli counterparts, who apparently spent a long time on the ground in ambush before marking the enclave with the UN-established border demarcation known as the “Blue Line" (the border demarcation between Lebanon and Israel recognized by the United Nations after the IDF withdrew from Lebanon in 2000).

Later on, a "team of geographic surveyors" of the Lebanese army arrived in order to closely examine the marking of the border.

The first notable incident of the IDF's operation occurred Saturday when IDF troops, operating in the enclave near the border, fired at three unarmed Hezbollah operatives dressed in civilian clothing, in accordance with the rules of engagement. The IDF says the suspects were trying to steal tunnel detection equipment before fleeing back into Lebanon.

There are several such enclaves along the 130 kilometers of the border with Lebanon, between Rosh HaNikra and Mount Hermon. The territory is under Israeli sovereignty, however; since these enclaves are located beyond the perimeter fence, the official borderline in these areas is unclearly defined and is subject to constant debate. From time to time, IDF troops conduct patrols in these enclaves, usually on foot, and covert activities.

These enclaves may be the focus of yet another incident between the two sides, which, if it ends in casualties to Hezbollah or the IDF, could lead to a significant escalation.

The growing assessment is that Operation Northern Shield will take several months, not several weeks, as estimated by IDF officials. Thus, one can assume that a local incident or misunderstanding with Hezbollah is only be a matter of time, despite the growing presence of inspectors from the United Nations Interim Force in Lebanon (UNIFIL), and IDF's assessments that the Shiite organization is still studying and examining the area and seeks no escalation. In light of IDF's increased and extensive activity on the border and its demand to operate against tunnels located on the Lebanese side, a presence of Lebanese troops in these enclaves can also result in a gunfire incident on the part of the Lebanese army, not necessarily on purpose or following instructions from higher command.