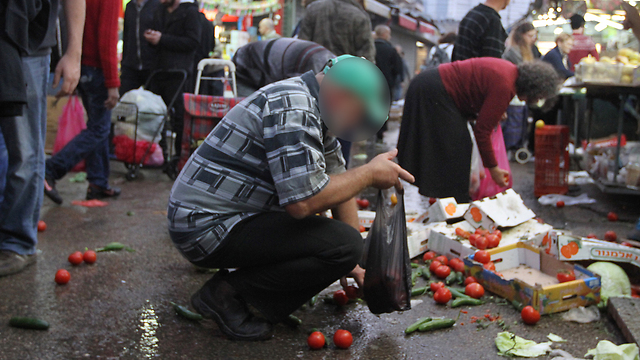 No food, no heating and no medication - one NGO paints a dismal image of the Jewish state in winter 2018

With Israelis bracing for expected consumer price increases, a local NGO has delivered a dismal image of more than one million children living in poverty in the Jewish state.

According to the report by Latet (Hebrew for "to give"), there are more than two million Israelis — 1.3 million adults and more than 1 million children - defined as poor. Overall, about one quarter of Israelis suffer from economic difficulties and meet various Latet criteria for living below the poverty line.

People collect food from ground in Carmel Market in Tel Aviv (Photo: Ido Erez)
The report states that almost one-quarter of Israeli children require welfare services, and more than one third of them skip at least one meal a day due to economic distress. The data also shows that 6% of aid-dependent children were forced to solicit donations and 5.7% had to collect food from the floor or from garbage cans. Among the elderly poor, the situation is deteriorating: 92% of them reported that their pension was insufficient and two-thirds said they were unable to maintain their health properly. Of those families defined as poor, 53% of the families said that they did not have enough food, and 72% feared that their food supplies would be finished before there was any more money. The distress also affects early childhood: 47% of aid recipients were forced to forgo milk substitute for their young children.

A homeless person in Jerusalem
The high cost of living severely affects weaker families: 71% of aid recipients are in debt; 49% are in foreclosure proceedings and more than half of poor families do not have access to heating as winter approaches. Two-thirds of aid recipients were forced to forgo medicine and 85% had to give up dental care. The report also depicted a particularly bleak image: 11% of aid recipients thought about ending or actually attempted to end their lives. "When there are more than half a million poor families and more than a million poor children, you cannot just get used to it and accept it," says Latet chairman Gilles Darmon. "Israeli governments may have gotten used to having so many poor people, but the poor children will never get used to it." Darmon and and Latet DG Eran Weintraub have called on representatives of all political parties, especially with elections looming, to focus on poverty mitigation.

The poverty index drawn up by Latet differs from that of the National Insurance Institute. Latet claims that there is a disparity of half a million people who live below the poverty line, as the NII only uses income to define poverty. Anyone who earns less than NIS 3,000 a month (about one third of the national average wage) is considered poor by the NII.

Latet on the other hand defines poverty using a number of other factors, including food and medication shortages. * The survey was carried out by the ERI research institute, using a representative sample of Jews and Arabs across all segments of the Israeli population.

Last month, Welfare Minister Haim Katz lashed out at planned cuts to his budget, warning that he would "not allow little girls to descend into prostitution," in order to fund pay rises for police officers. The cuts also affect the Welfare Ministry's program to lift families out of the cycle of poverty.