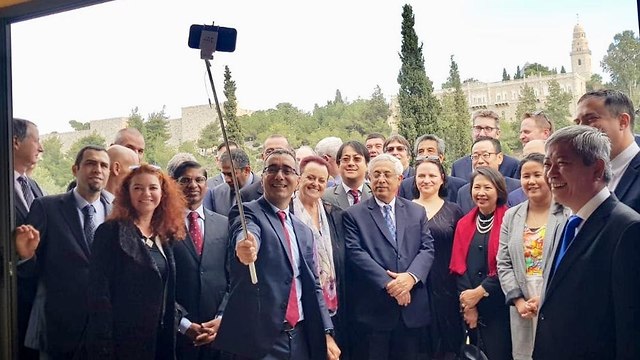 Ambassadors from Asia and the Pacific meet in Jerusalem

On the backdrop of Australia's recognition of West Jerusalem as Israel’s capital, Asia and the Pacific ambassadors to Israel meet with their Israeli counterparts in the Old City to discuss deepening cooperation.

Ten Israeli ambassadors and consuls general in Asia and the Pacific met Monday with their foreign counterparts in Jerusalem.

The meeting, held as part of a diplomatic conference organized by the Foreign Ministry, was attended by senior diplomats from China, Japan, India, Vietnam, Nepal, Korea, Sri Lanka, Thailand, Australia and Myanmar.

The guests were seated according to their geographical location in order to allow direct dialogue between Foreign Ministry officials, who were also in attendance, and the foreign ambassadors.

Deputy Director General for Asia and the Pacific, Gilad Cohen, said that he would be happy to host the envoys in Jerusalem, the capital of Israel, and hoped that Asian countries would follow Australia's example and recognize Jerusalem as a capital. "Jerusalem's origin is King David's time, not Camp David," he stated.

The Israeli and foreign ambassadors discussed deepening cooperation between their respected countries and the Jewish State.

'We look forward to moving our embassy when practical'

Two months ago Morrison said he was open to moving the embassy from Tel Aviv to Jerusalem, but did not mention that Australia will only recognize the western part of the city.

Despite his announcement, the Australian premier noted that the move will only take place once an agreement has been reached on a two-state solution.

"Australia now recognizes West Jerusalem, being the seat of the Knesset and many of the institutions of government, is the capital of Israel. We look forward to moving our embassy to West Jerusalem when practical," he told reporters in Sydney.

According to Morrison, after a settlement has been reached between Israel and the Palestinians, the Australian government will also recognize the aspirations for a future state of Palestine with East Jerusalem as its capital.

Although the embassy's move to West Jerusalem is unlikely to happen soon, in the meantime, Australian trade and defense offices would be set up while the country examines a future site for its embassy.