Dema in the Knesset 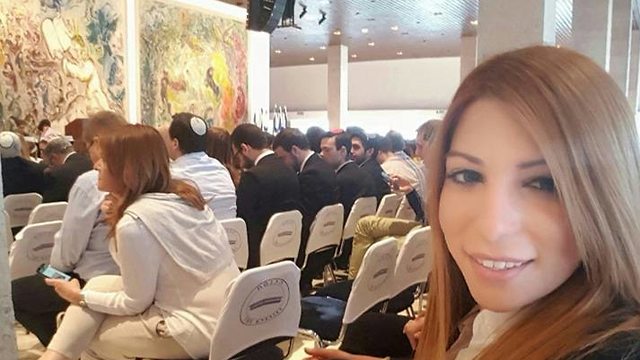 Muslim Likud hopeful gets public cold shoulder from her family

A young Israeli Arab woman has found herself out in the cold with her family after she said she wishes to compete in the primaries for Prime Minister Benjamin Netanyahu's right-wing Likud party, ahead of the Knesset elections on April 9.

The family of Dema Taya family from Qalansawe, in central Israel, released a statement last week that they are distancing themselves from their daughter over her political aspirations.

The 25-year-old Dema, who lives in the Galilee town of Kfar Manda, is outspoken in her support of Israeli democracy and its treatment of minorities. She recently participated in a public awareness campaign in the United States on behalf of Israel, sponsored by Reservists on Duty (an Israeli NGO seeking to expose and counter the BDS movement and new forms of anti-Semitism).

Dema as a Knesset tourguide

“We, the Taya family of Qalansawe are declaring to all that we are distancing ourselves from Dema Sayyif Taya Zidan (her full name). We condemn and categorically reject all her statements that were published by the media. She is not associated with us in any manner,” wrote the family. It is unclear which of her family members were signatories to the letter, as it seems that she does have the support of some of them.

“All that was said by her represents her views and not ours. We declare that we will not maintain any contact with her nor support her until she retracts her words and beliefs, and declares her allegiance to the people and religion that she is really a part of,” they added.

Taya family notice
One family member told Ynet that, “We are all disappointed because of what she said; it shows how weak she is. In such a manner she will not get far in Arab society and she is causing harm to herself.” “We are all familiar with the Likud and its leader who, during his tenure, 15 homes were demolished in Qalansawe. Dema was silent in response to that and even if she will be in the Likud she will maintain her silence like many other ministers,” he added, referring to Communications Minister Ayoob Kara (an Arabic-speaking Druze Likud member) and others.

Dema Taya
On Wednesday, following the announcement by her family, Taya posted on Facebook that the announcement was false and signed by “criminal youth” and that she reported it to the police. She further wrote that if the Arab media makes use of the letter against her she will take legal action for “seeking ratings at my expense.” She also accused the Arab media of promoting hate and incitement to violence and discrimination against women. “I assert that the State of Israel is a state of law and anyone who seeks to harm me or incite against or harm my reputation will be handled by the police and law enforcement. I am proud of the path I chose and I believe that I will be elected by the nation that loves and supports… The nation of Israel lives!” she wrote. Dema moved to Kfar Manda following her marriage. She said that she intends to defend Israel's public image and influence the Arab sector through the ruling party. "As a Muslim woman, I can save the sector from those committing an injustice to the state," said the young woman who declared that she intends to combat the BDS movement as well. When announcing her candidacy, Dema also praised the departure of MK Hanin Zoabi (Joint List) from politics: “Knesset members like her don’t help and don’t represent me and many others.”

Zoabi herself has a relative who is a fervent supporter of Israel. Mohammad Zoabi from Nazareth has condemned the Palestinian Authority as a terrorist organization and expressed his intention to join the IDF.