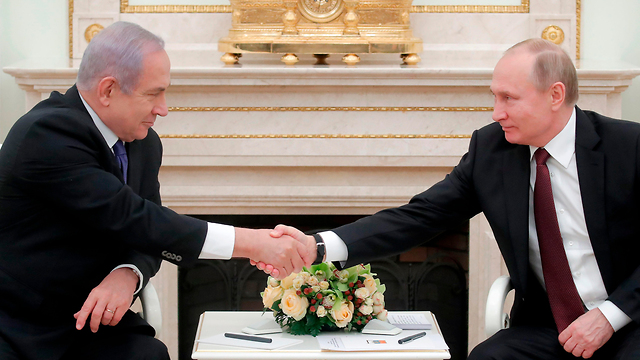 MOSCOW — Israel is determined to continue its strikes on Iranian targets in Syria, Prime Minister Benjamin Netanyahu told Russian President Vladimir Putin in Moscow on Wednesday, in their first working meeting since Syria accidentally downed a Russian plane during an Israeli aerial assault in Syria last September. The talks were to focus on IDF activity in the region and the Iranian entrenchment in Syria.

The prime minister also highlighted what he said were his own personal ties to Putin, and credited this relationship with making the Middle East more secure.

"I would like to congratulate you and the Russian people on Defender of the Fatherland Day. We will never forget the roles played by Russia and the Red Army in defeating the Nazis. Several days ago we decided to complete funding for the Museum of the Jewish Fighter in World War II. Approximately 500,000 Jews fought in the Red Army. Soon we will dedicate a memorial in Jerusalem to those who fell during the siege of Leningrad. Mr. President, I would like to invite you to be our guest of honor; no one is more deserving.

"Mr. President, I have counted eleven meetings between us since September 2015. The direct link between us is a vital component in preventing risks and friction between our militaries and contributes to security and stability in the region.

"The greatest threat to stability and security in the region comes from Iran and its proxies. We are determined to continue our vigorous action against the attempts by Iran, which calls for our destruction, including its attempts to entrench militarily in Syria," the prime minister said.

"I would like to discuss this with you but also our excellent bilateral relations, which are due to the over 1 million Russian-speakers who have contributed greatly to Israel, have become part of us and have brought the Russian culture as part of Israeli culture. Moreover, tourism is at an all-time peak; 400,000 Russians visit Israel every year and approximately 200,000 Israelis visit Moscow every year. I have the honor of contributing a little to this statistic. And of course I want to say all of the good things we have done together, such as the pension agreement, 96% of which is being realized," he added.

"And indeed, in all of these areas, I would like to thank you for your friendship and the direct, open and genuine manner in which we maintain the links between Russia and Israel. Thank you Mr. President," Netanyahu said.

Putin in turn welcomed Netanyahu, saying: "It is very important that we continue to cooperate between ourselves. Russia was a partner in supporting the establishment of the State of Israel... We would very much like to talk about the situation in the region and the security issue."

"I am heading off to an important meeting with Putin in Russia," Netanyahu said before taking off from Israel on Tuesday night.. "The conversation will surely deal with several issues, but from our perspective the focus of the conversation will be preventing Iran's entrenchment in Syria, a country that clearly declares it has decided to eradicate the State of Israel. And you know that when I say that we are working to counter this, this is not mere lip service. I will go into detail with Putin, so as to ensure that the IDF is coordinated in such a way to prevent friction with the Russian army."

Netanyahu on Tuesday delayed his visit to Moscow due to the row over a video released by his Likud party's election campaign that used a military burial plot as backdrop for one of the scenes.

At the end of the video, Ivri is seen in front of a backdrop of a military cemetery saying "Gantz is part of the left, and the left is dangerous."

Netanyahu instructed the campaign to immediately delete the video from Facebook, investigate the incident—which he described as a "regretful editing error"—and to take steps against those responsible.