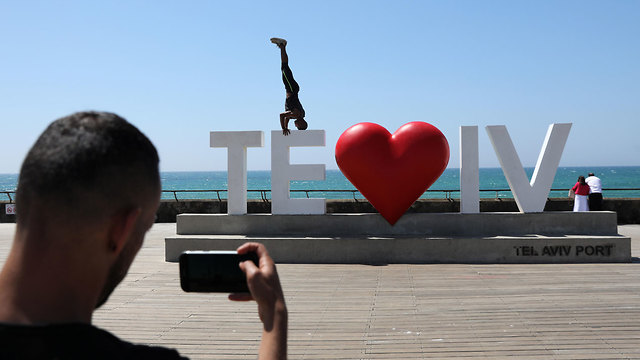 Breaking the Silence harms Israel with attempts to politicize Eurovision

Opinion: The prestigious song contest is traditionally an apolitical event, which is essentially a tourism ad for the host country, even right-wing hardliners like Miri Regev understand that; the anti-occupation group, however, want Europeans to stay biased against Israel

The Eurovision Song Contest is an entertaining, flamboyant event and apolitical at its core. It’s an opportunity for a host country to show off its best assets. That’s the nature of the event. Each participating delegation has a so-called "video postcard," showcasing their home country, while omitting the problems it might be dealing with, with only amazing scenery and beautiful beaches.

When Britain hosted the Eurovision Song Contest in the 70s, 80s and 90s, they didn’t mention The Troubles in Northern Ireland because the Brits knew how to play by the Eurovision rules. Even the dubious types like the current Labour Party leader Jeremy Corbyn, who was among the most overt IRA supporters, remained silent during Eurovision, when the British capital was flooded with tourists.

There are also neo-Nazis marching in Finland and Sweden but they of course aren’t shown in their video postcards.

Thus, when Culture and Sports Minister Miri Regev thought the prestigious singing competition was an opportunity to score some political points, it was made clear to her that it was a waste of time. To her credit, she quickly realized that Eurovision is bigger than her, and there is no need for any government intervention at all.

For the tourists who flood the streets of Tel Aviv, it’s an opportunity to see Israel with their own eyes and not through the eyes of local news broadcasters. Yes, this is an expensive country but with amazing restaurants, rich nightlife and magnificent beaches.

The local media in Eurovision countries portrays Israel through the lens of the occupation. This is evident in almost every survey conducted in those countries, which expose a negative view of Israel (because of that biased and generally anti-Israel media). But now it’s the people's chance to see Israel differently.

One Israeli organization, however, decided the anti-Israeli propaganda the Europeans are exposed to in their home countries is not enough. Breaking the Silence activists want more. This is why they put up a huge billboard on the Ayalon Highway, inviting guests to propaganda tours, which they say expose Israel’s crimes.

This organization doesn’t believe that Israel is a democratic state, nor does it tell those embarking on their tours along the Gaza border that Hamas supports the destruction of the Jewish state, and that the terror group rejected all reasonable proposals made to them, which would have resulted in the lifting of the Gaza blockade. According to Breaking the Silence, Hamas is the hero and Israel is the villain in this conflict.

Israel is a democracy, where it’s acceptable - and even encouraged - to criticize the government. It’s unfortunate that instead of allowing this apolitical event to go on without interference, there are those who insist on using this opportunity to spread anti-Israel propaganda.